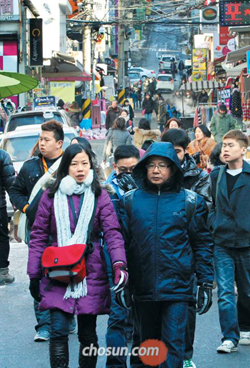 Until the 1990s, Sinchon district in northwestern Seoul was the "in" place to hang out for young Koreans, but nowadays the Hongik University area is the hip part of town.

The Hongik University area which was among the fastest-growing commercial districts in the capital in the 2000s, began to take off after the 2002 Korea Japan World Cup and became known as the center of the city's clubbing scene. The area has now overtaken Sinchon to become the main hangout in northwestern Seoul for trendy people in their 20s and 30s.

Sinchon's main commercial districts stretch from the front gate of Yonsei Unviersity to Ewha Womans University and were one of the most lucrative in the capital up until the mid-1990s. But as trendy clubs and bars began to spring up in the Hongik University area just one or two subway stops away, young crowds began to move away from Sinchon in favor of the new entertainment scene.

The new consumption patterns of young shoppers have also impacted Shinchon. As online shopping malls grew increasingly popular, the fashionable strips of tiny boutiques near the front gate of Ewha Womans University selling clothes, shoes and accessories saw a sharp decline in the number of customers.

"The Hongik University area is growing bigger due to its large-scale and diverse shopping and entertainment facilities, while the Sinchon area is shrinking", said Park Dae-won, a real estate analyst.

"Sinchon just about manages to retain some charm with its dining places and eateries, while shopping districts around Ewha Womans University are characterized by small boutiques. But the Hongik University area has become a trendy hub that meets the diverse tastes of young consumers", added Park.

But since the mid-2000s, the Sinchon and Ewha Womans University districts have been showing signs of a revival following a prolonged slump thanks to a growing number of tourists from China, Hong Kong and Taiwan.

Rumors spread among Chinese tourists that having their pictures taken in front of Ewha Womans University would make them wealthy, prompting visitors from overseas to replace young Koreans who had abandoned the area. The Chinese spelling of Ewha is similar to the Chinese characters meaning "money comes in".

Another attraction is that there are a large number of shops selling affordable clothing items and accessories favored by young women. These days, between 1,200 and 1,500 Chinese tourists visit the area a day aboard 30 to 40 buses.

The throngs of Chinese tourists have changed the landscape of the shopping neighborhood. Instead of small shops that sell clothes or cosmetics, there has been an increase in the number of large franchise stores that tourists favor.

Signboards and promotions at stores are now often written in Chinese, while a growing number of shops have hired Chinese to work as part-time interpreters. At a branch of The Face Shop chain of cosmetics stores there, 60 percent of the customers are Chinese tourists, who account for around half of daily sales.

But experts say that tourists alone will not guarantee a genuine revival of the commercial districts there as a lack of attractions could cause visitors to shift to other areas depending on the latest trends. Around Ewha Womans University, many shops remain empty, except for those on a few streets frequented by Chinese tourists.