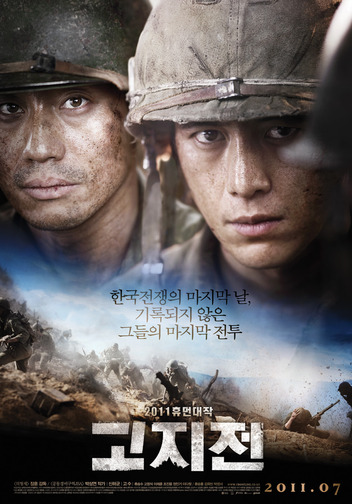 The upcoming Palm Springs International Film Festival (PSIFF) will screen South Korea's Oscar submission"The Front Line" in its Awards Buzz section. The section will feature 40 of the 63 official submissions the Academy Awards' Best Foreign Language Film category. The 40 films were selected by festival programmers as the strongest entries in this year's race. The 2012 PSIFF will run Jan. 5 – 16.

Directed by Jang Hoon, "The Front Line" is set during the Korean War on a hotly contested patch of mountain. SHIN Ha-kyun stars as a South Korean officer sent to investigate a mysterious death and finds an old friend (Go Soo) whom he thought had died as a prisoner of war two years before.

The Awards Buzz films in alphabetical order by country are as follows, by title/country/director.

"Palm Springs fest to screen The Front Line"
by HanCinema is licensed under a Creative Commons Attribution-Share Alike 3.0 Unported License.
Based on a work from this source