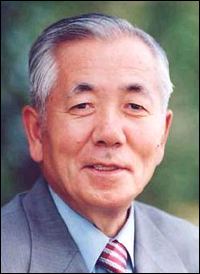 Kim Dong-ho, festival director of the Pusan International Film Festival (PIFF), will be awarded the City of Paris Medal for his contribution to international cultural exchanges.

The PIFF organizing committee Tuesday said Kim will receive the medal from the city government in a ceremony on July 3 at the city hall there.

The committee said Kim was selected for his great accomplishments in international exchange in the visual arts and helping French film directors further their position in Korea.

The city established the award in 1911 to express its gratitude to those who made significant achievements in a variety of fields. Previous award winners from the film industry include director Jean-Pierre Jeunet, director Oliver Stone, action movie star Jackie Chan and Japanimation director Hayao Miyazaki.

He will visit Paris at the invitation of the 4th Paris Cinema Festival, which takes place June 27-July 11. The festival has arranged the New Korean Cinema program in which 40 Korean movies will be screened to celebrate the recent boom in Korean films.

Later, Kim will tour other European film festivals, including the Locarno International Film Festival and the Venice Film Festival.