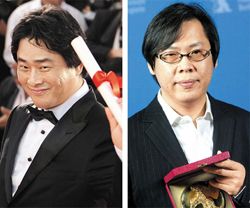 The art of making films with a smartphone is still in its infancy, but it took a huge leap forward with the winning of a Korean short film at the prestigious Berlin International Film Festival which ended on Sunday.

The Golden Bear award in the short film competition at the 61st Berlinale went to the 33-minute film "Night Fishing", which was shot on an Apple iPhone 4 by renowned director Park Chan-wook and his younger brother Park Chan-kyong.

The elder Park has achieved worldwide fame with several critically acclaimed films including "Oldboy", winner of the Grand Prix at the 2004 Cannes Film Festival. Chan-kyong is a media and installation artist who studied painting at Seoul National University.

"I hope this award will help to get more creative and experimental films made and push the boundaries of filmmaking", Chan-wook said Sunday.

"Night Fishing" alternates between fantasy -- a fisherman played by Oh Kwang-rok netting the body of a shaman dressed in white played by Lee Jung-hyun -- and reality, where Lee performs a ritual for the drowned fisherman.

But some critics are wary of praising "Night Fishing" as a revolutionary breakthrough in filmmaking, as its production and budget were not much different from those made with film cameras. Due to some technological limitations, especially for the night scenes, the brothers had to rely on professional lighting and filming equipment as well as makeup and special effects.

Some also point out that its success was only possible with the sponsorship of a large corporation like mobile operator KT. It took 50 days, W150 million, and a crew of 80 to make the film. In contrast, most of the other shorts submitted to the iPhone 4 Film Festival held last October had a budget of W3 to 5 million, a crew of 10 and three to five days to complete.

While "Night Fishing" was released in cinemas in Korea, no other short film made with a smartphone including those made by 12 filmmakers including Lee Joon-ik and Chung Yoon-chul last year has been released on the big screen so far.

Nevertheless, many agree that the Park brothers' win at the Berlinale will serve to bring digital techniques into the mainstream of filmmaking. Film critic Jeon Chan-il said, "Using cutting-edge technologies such as smartphones to make movies will shatter the limits of expression and bring much more diversity to the art".

A total of 25 films were invited to the short film competition at the Berlinale. "Broken Night" by Yang Hyo-joo, who graduated from the Korea National University of Arts this year, won the second prize in the category.
___________________________
Park Chan-wook (left) and Park Chan-kyong