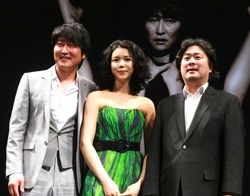 Recently, celebrated cineastes like Lee Chang-dong ("Secret Sunshine") and top stars Jeon Do-yeon and Rain, among many others, were seen visiting the set of Park Chan-wook's much talked-about feature, "Thirst". The film's trailer was revealed for the first time before the press, Tuesday, in Seoul, before its release April 30.

It was indeed novel to see the all-too-familiar, yet distinctly foreign, theme of Universal Pictures opening the impressionable clip. "Thirst" is the first South Korean film to be co-produced and distributed by a major Hollywood studio.

"I'm not so sure how it happened", Park told the crowded press room regarding Korean giant CJ Entertainment's partnership with Universal. In a video clip provided by organizers, Universal's Focus Features CEO James Shamus said he was "desperate to in some small way be part of this incredible filmmaking genius' work".

"I don't expect big results like grossing high in the American box office or winning an Academy nomination. I think this is the first endeavor for a Korean film to be treated seriously in the U.S. market", said Park. "But personally, I've always admired and was greatly inspired by the foreign movies that Focus Features distributed in Korea, and I wondered if one day my movies could be credited (by Universal). I feel extremely proud to see it's been realized".

The Tinseltown exposure, however, appears to be just an added bonus for Park. For the director, the priest-turned-murderous vampire story is a very personal project that he spent over a decade dreaming up.


While "Thirst" makes a sharp turn away from his last film "I'm a Cyborg, But That's OK", it is nevertheless expected to showcase the hallmarks of Park-brand movies. It revisits violent themes explored in his "Vengeance" trilogy and omnibus "Three, Monster", and like his other works, features well-known stars in improbable roles.

Award-winning actor Song Kang-ho ("Secret Sunshine") was cast as Sang-hyeong, a respected priest, who, after transfusing mysterious blood, turns into a ravenous vampire. He starts breaking the 10 Commandments as he lusts after human blood and covets his friend's wife Tae-ju, played by rising starlet Kim Ok-vin ("Dasepo Naughty Girls" - "Dasepo Girl"). Tae-ju is a repressed housewife who awakens to her own desires upon meeting the vampire-priest, and uses her newly discovered femme fatale prowess to convince Sang-hyeong to kill her husband.

Having grown up in a Catholic environment, Park said he had many opportunities to contemplate the celebrant identity. "I wondered about the psychological anguish a (priest) would have to undergo if he is forced to commit murder and other sins. I then conceived of the vampire theme and then I integrated elements of an Emile Zola novel", he said.

The two lead actors said the movie was basically a love story. Park agreed, saying "The movie features many issues, such as the clashing of Eastern and Western cultures. But it boils down to being a story about the struggles of a man who meets the wrong woman.... This kind of personal approach made it easier to direct the movie".

The director said he was able to personally relate to the vampire-priest character. "The priest character integrates much of my own personality, which is a first for my movies. His feeble and somewhat cowardly way of justifying himself and giving excuses for odd mishaps doesn't feel like someone else's story. It's a very personal matter and I poured a lot of my heart into it", he said. "Also as a moviegoer myself, this is my kind of movie".

On assuming the atypical role, Song said "I tried to express my character as humanly as possible". Park praised Song's immense talents and moreover, his "almost offensive intellect" combined with a high capacity to concentrate. Song's co-star Kim also gave her compliments, saying, "I was able to feel in the flesh what a true actor is. He was perfect and left nothing out in each and every scene".

This is the third time Park has teamed up with Song, who is also a close drinking buddy. The director first told the actor about "Thirst" and "Sympathy for Mr. Vengeance" while shooting their first project, "Joint Security Area", in 1999.

"When I first heard of "Thirst", I was doubtful whether or not such a creative, fantastic and artistic movie could be realized", said Song. "But Park has proved over the years with his movies that it is possible", he said, adding how honored he was to be part of the movie.

Meanwhile, the media spotlighted the casting of Kim by Park, who has worked with the country's top actresses like Lee Young-ae and Kang Hye-jung. Song praised the actress' incredible energy that kept him on guard, with competitive spirit, throughout the shoot. "She has a certain uneasiness and edge to her character People will wonder, wow was there such an actress in Korea? She has great potential", said Park.
_____________
From left, actors Song Kang-ho, Kim Ok-vin and director Park Chan-wook appear at a promotional event in Seoul, Tuesday, for the vampire movie "Thirst". The first South Korean movie to be co-produced and distributed by a major Hollywood studio, "Thirst" will be released here April 30. / Yonhap
Copy & paste guideline for this article
Always put a link back to the source and HanCinema permalink

"Park Chan-wook Explores Self, Dream in 'Thirst'"
by HanCinema is licensed under a Creative Commons Attribution-Share Alike 3.0 Unported License.