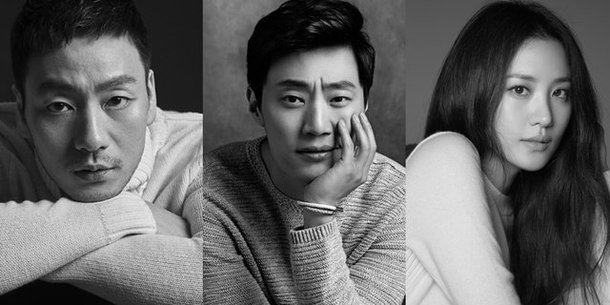 "Chimera" tells the story of three leading characters who dig through secrets of the past 30 years to find a culprit named "Chimera" when a series of murders known as the 'Chimera killings' that occurred in 1984 happens again in 2019. It is written by Lee Jin-mae and directed by Kim Do-hoon.

The title "Chimera" is the name of a monster that appears in Greek legends with the head of a lion, the body of a goat and tail of a snake which breathes fire. The title alone makes us look forward to the overwhelming scale of the explosion accident in the 'Chimera killings'.

This is also PD Kim Do-hoon's first drama in 6 years and he's coming back with a daring challenge in bold directing techniques that he has not attempted so far, showing a wide gap in content and atmosphere from his previous works.

JS Pictures says, "The three actors are considered for their solid acting skills. We are excited about the synergy between their performances and director Kim Do-hoon's unique and meticulous production. We are planning to create a work that aims for maximum appeal and immersion by including elements such as explosions, chase scenes and more with colorful scale and elaborate production, so please look forward to it".

"Park Hae-soo, Lee Hee-joon and Claudia Kim Confirmed for "Chimera""
by HanCinema is licensed under a Creative Commons Attribution-Share Alike 3.0 Unported License.
Based on a work from this source