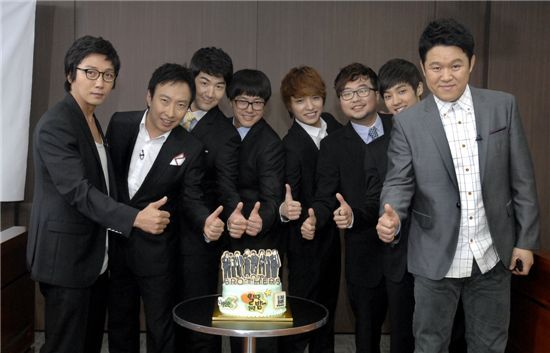 Such set-ups in the show was revealed at the show's press conference, held May 24 at MBC Broadcasting Center in Seoul's Youido district. In the "Loser's Round" episode, the third and final installment of "Avatar Blind Date Series" where the master of the avatar changes from one member to another, members were newly paired up and gave viewers a new reason to laugh than during the first and second episodes. In the fourth episode titled "Know Thy Brother", the cast were given an absurd situation and seen struggling through it, each in his own way. Can "Hot Brothers", which stands between being a reality-based variety show and a sitcom, really ignite a hot spark among variety shows with its unprecedented, mutated humor? 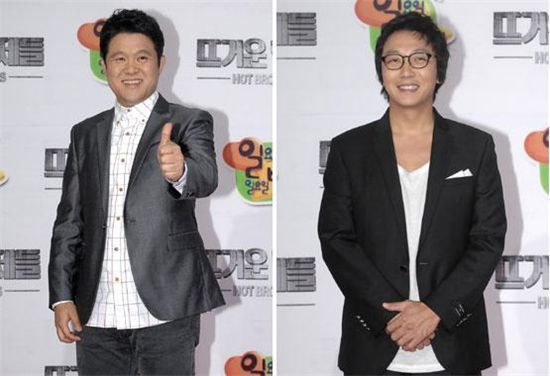 Q: You said that the new "Hot Brothers" segment will revive the popularity of "Sunday Sunday Night". All of you must feel quite determined about doing it.
Tak Jae-hoon: When the segment line-up changed in "Sunday Sunday Night", I joined "Danbi" [another segment on the show] and tried to inspire viewers. From now on, I will leave it to "Danbi" to inspire people and focus on providing laughs. We are going for a different approach, unlike the existing variety shows. We will work hard on creating laughters. You may even call us "dorks".
Park Myung-soo: Tak Jae-hoon and Kim Gu-ra are probably feeling a burden on their shoulders. They failed on their two previous segments. (laugh) In a way, this is their last chance. Right now, it is trendy to shoot variety shows outside the studio but we are trying to do a new things that we can shoot inside the studio. The most important thing is to enjoy working on the show. I don't want to feel like I don't remember what I did today, I want to feel like I had a good time shooting today. We are trying to create new kind of humor -- such as huge laughters and a lot of fun stuff. This -- I am going to make people laugh with it. (laugh) 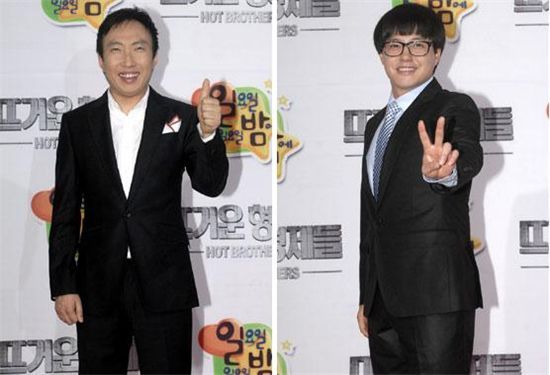 Q: You are trying to make a new type of show but it is a red ocean market. There are many rival shows that have a group of male stars appearing in them. How are you trying to differentiate the show?
Producer Oh Yoon-hwan: I monitored the viewers' board on the show's website and I don't think that they see it as something similar to segments like "The Qualification of a Man" or "1 Night 2 Days" from KBS' "Happy Sunday". The intention behind making "Hot Brothers" was we wanted to show people that brotherhood is not limited to those who are brothers by blood. We want to show viewers how people who are have different jobs and are of different ages build on their brotherly bond. Simply put, I want people to regard it as a total gift set of variety shows that charges toward laughters.
Tak Jae-hoon: I wish there was a third species other than men and women. (laugh) Then we would have a new picture. Eight of us started doing the show with the aim of sharing a brotherly bond but we were met with MBC's labor strike. We were frustrated because we were having a great time but could not get on the air for eight weeks. I thought I was going down again. (laugh) The 4.8 percent rating [for the first two episodes] bothers me, but I think it will enter the ten percent range once we hit episode four. From the fifth episode, we are trying to make a new program with an entirely different approach.