Park Jin-hee Earns Her Paycheck in "War of Money" 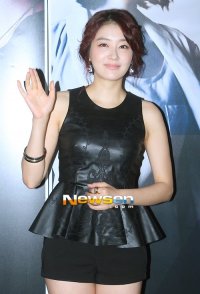 With its ratings above the 30-percent mark, the SBS drama "War of Money" has become one of the most popular shows on TV, thanks in great part to the performance of actor Park Shin-yang.

But even Park and his angel-to-devil transformations hasn't been able to overshadow actress Park Jin-hee, who's been drawing avid praise for her performance of a righteous woman facing a slew of financial hardships.

Park Jin-hee, who returned to the small screen after a four-year break with last year's 25-percent-ratings hit "Come Back, Soon Ae", has become the queen of the tube with the runaway success of "War of Money".

The actress, who is a bit of a straight-shooter, said, "When I first got the script I was surprised to find how small my scenes were. But now I've changed my mind. Park Shin-yang acts so hard and so well, he's certainly the one who should be in the spotlight".

The actress first came to stardom with the 1998 movie "Whispering Corridors", but the path from there wasn't so smooth. She was praised for her emotional performance of a single mother in the KBS drama "Silk Flower" in 2001, but had found few other successes in films or TV. She decided to take some time for a little introspection. "I asked myself if I had honestly put in the passion to really light up my work. And the answer, shamefully, was no".

It was time for a break, she felt, so she stopped working for a year and a half. During the downtime, Park found herself growing in her everyday life. "I would sleep all day, daydream, drink as much as I wanted, watch movies for days... Those days passed away, and each one became the base of my acting. I wasn't worried about being forgotten".

The break paid off when she was cast to play the 40-something "ajumma", or shrewish spinster, trapped in the body of a sexy young 20-something in the comedy soap "Come Back, Soon Ae". The performance came naturally because of the energy she'd been building during her hiatus.

In her latest hit "War of Money", nearly every scene is full of talk about money, so the question had to be asked -- has Park ever suffered true financial hardships? "Of course. My dad suddenly quit his job when I was a student, and I dreamed of a prince charming when we had no money".

Park got her start as an actress when she was selected to play a role in "Start", a drama for teens. "At the time, it was more of a curiosity rather than thinking of acting as a career". And what about now? Has she come to see acting as a real career? "My earning is way too high to not think that way. It'd be irresponsible to think otherwise, wouldn't it?"