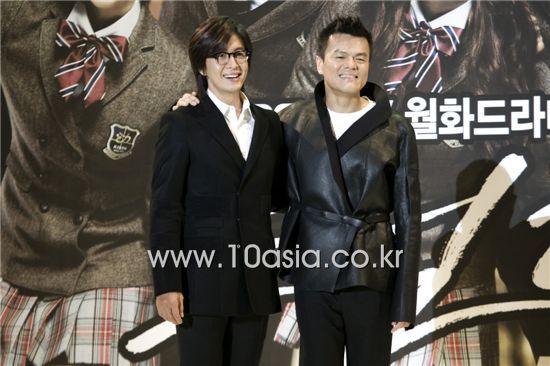 Even though announcer Lee Ji-ae emphasized that both Bae Yong-joon and Park Jin-young were there as producers and not actors, it was no use. At the press conference for KBS' "Dream High" held at the Ilsan Kintex located in Gyeong-gi Province, a Japanese translator appeared for Bae Yong-joon's Japanese fans and 2PM and miss A's fans cheered for JYP Entertainment's founder and CEO Park Jin-young. The is how strong of an influence these two 'star creators' had combined. However, the title of 'producer' is something they were both uncomfortable with and they instead spoke of how the largest reward they have seen from working together was "meeting someone of the same age" and "with the same dream". Below are excerpts from the press conference.

Q: Not only did you plan the drama but you also make appearances in the show as well. What role do you play?
Bae Yong-joon: I play the role of Jung Myung-ha, who is the head of Kilin performing arts school, who worries about how to create an environment where talented students can follow their dreams. For me personally, it was a new experience to make a guest appearance instead of playing the male lead. While shooting with my juniors I saw their talent and felt their enthusiasm.
Park Jin-young: I am 'rookie actor' Park Jin-young who plays the role of Yang Jin-man, a music and dance director as well as the English teacher. Jin-man is someone who dreamt of becoming a singer but leads a lonely life after forgetting about his dream due to some major hardships he experiences. He is reminded of his dream after seeing the students and through them he tries to make his dreams become reality. I am really nervous about acting and I took on this challenge with the encouragement from Bae Yong-joon, Ok Taecyeon and Rain. 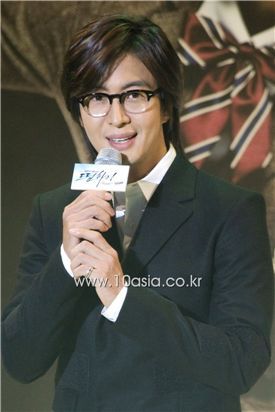 Q: "Dream High" has garnered a lot of attention after becoming known as 'Bae Yong-joon's debut production'.
Bae Yong-joon: Many people know me as a producer but I took on the role of creative producer [for the show]. My job is to present the objective and overall concept for the show as well as suggest ideas. I think that I will probably have to help out with what happens on set as well as with directorial work. (laugh)

Q: We are curious on how "Dream High" came about and why the two of you decided to work together.
Bae Yong-joon: I have always had interest in children's education and thought of creating a special school that trains entertainers. And I found out that Park too had similar ideas so we decided to collaborate.
Park Jin-young: That is the biggest reason we decided to work together while I still have that dream. We are actually in talks on establishing a school [like Kilin performing arts school] and it's both our dreams to make this drama into a reality.

Q: Were the two of you close enough to share such ideas even before this project came about?
Bae Yong-joon: Actually no. Before this project, I was just Park Jin-young's fan.
Park Jin-young: The greatest thing that I have gained from this drama is a friend who is the same age as me. It's really comforting to know that we can just meet up after work and just talk over beer.

Q: As a producer, what were some of the main points that you focused on for the production?
Park Jin-young: There were many aspects that I was not familiar with since I am new to the field of drama. That is why Bae is taking the lead when it comes to dealing with the drama aspects of the show. The most important thing is to realistically portray the process of how these students become stars.
Bae Yong-joon: We are focusing on how, as these students grow, they express their various emotions like their concerns, conflicts and hopes through song and dance. On that note, I think Park knows more about that subject than I do. 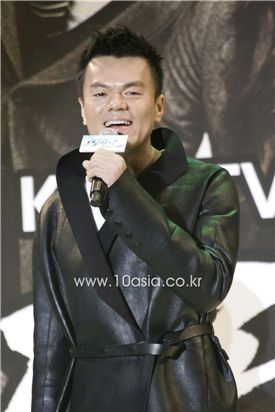 Q: As important as Park's role is, what exactly do you do as music and dance director?
Park Jin-young: What I paid attention to was to make the songs and dances in the dramas seem real and be ahead of the latest trends. We spent the most time making the soundtrack, coming up with a total of ten songs of which six I composed and four in collaboration with other composers. I also came up with the best and new dance moves to match those songs.

Q: The show features a mass of new actors so I'm sure you are more concerned with their acting abilities. Park, this is your first time acting as well, isn't it?
Bae Yong-joon: Reality and sincerity are necessities to a drama. So they may be first-time actors but I thought that the leads should be played by idols who can actually sing and dance.
Park Jin-young: What I found the hardest was being worse at something than the people I've taught. (laugh) I was more nervous than it [acting] being hard. It was awkward playing someone who wasn't me in a short time period and Bae encouraged me by saying, "Try to show who Park Jin-young is than trying to act. Acting will be a lot of harder if you try to force it". That helped me a lot.

Q: Park, what do you think is most appealing about yourself as someone who actually created stars?
Park Jin-young: In drama and in real life, the most important thing is that these idols that I work with aren't my students and rather colleagues who love music like I do. We listen to music together and get excited together. We listen to the songs that they recorded and excitedly talk about being on stage. I believe that is the biggest reason I've been successful so far.

Q: Bae is the original Hallyu star and JYP Entertainment is leading the way throughout Asia with the K-pop craze. Does "Dream High" have any significance as new Hallyu content?
Bae Yong-joon: I believe that this project has many possibilities. It can be categorized in the crossover genre since it breaks down the boundaries of the current output of video content. I think there is enough possibility of this production to be recreated into a musical or movie because of the elements of dancing and singing.