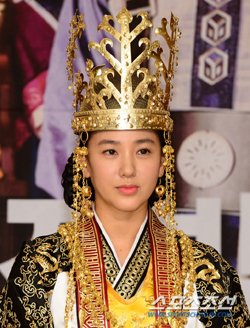 Actress Park Joo-mi, who has been commuting to hospital since a serious car accident in late October, decided to jettison the lead in KBS1 soap "The Great King's Dream"

The production team on Wednesday concluded that Park's departure is inevitable following talks with her and her agent, as the actress' health should be a priority and the program cannot afford to delay shooting any longer.

Park needs to continue treatment and get absolute rest, but she was determined to continue with the show and had been in regular contact with the production team and negotiated a possible return.

However, her injured esophagus is putting pressure on her vocal chords, and she is struggling to speak. Doctors also warned her that putting further strain on the vocal chords could affect her recovery, and in the worst case she would never recover her voice fully. They prescribed at least eight weeks of rest and recovery time.

The production team said, "This will be disappointing news for many fans who have wished Park a quick recovery. But this was the best decision we could make as we have to make her health a priority and we cannot afford to wait any longer for the smooth running of the program".