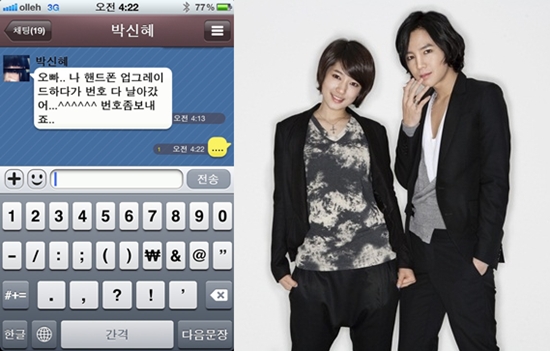 Park Shin-hye sent Jang Keun-suk a text in the middle of the night.

She posted on her Twitter on September 16th, "Everything on my phone got deleted while upgrading it!! I'm so sad!!"

Jang Keun-suk comforted her with the short word, "Awkward" at her mansion.

He then posted a capture of her text saying, "I lost everything on my phone; send me your phone number". He didn't show what he replied back but fans are curious.

Those who have seen the text say, "Hallyu couple Park Shin-hye and Jang Keun-suk, you guys seem close", "So Cute", "Seeing this text makes me feel like that was for me", "What are you doing not sleeping at 4AM!" and more.

Meanwhile, the two co-acted in the SBS drama "You're Beautiful", and it was later shown on Japanese Hallyu channel KNTV, gaining huge popularity.

"Park Shin-hye texts Jang Keun-suk for phone number"
by HanCinema is licensed under a Creative Commons Attribution-Share Alike 3.0 Unported License.
Based on a work from this source