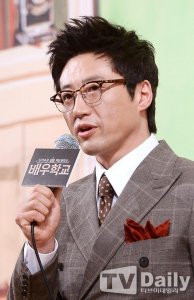 Actor Park Shin-yang who is currently shooting a brand new SBS drama entitled 'Painter of the Wind' recently said he has never been in a drama so powerful it "gave him the goose bumps".

'Painter of the Wind' is Park's very first history drama experience since his debut. The actor doesn't attribute his "shock" to the challenges he's facing as a first-timer on an epic history drama series.

In a recent interview with a drama promotion agency, Park said he has never been in a drama or a movie as intense as 'Painter of the Wind'. He said the drama, based on a novel, is a dramatic story that incorporates weaves together art, love and mystery. The actor showed his excitement by saying the drama will be a unique piece of work unlike any other.

'Painter of the Wind' is a powerful story of two genius artists of Joseon, Kim Heung-do and Shin Yun-bok. The traditional yet modern style of the drama will begin airing in late September on SBS TV.