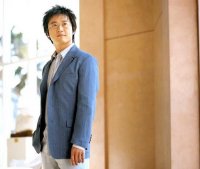 Actor Park Shin-yang has pledge to provide scholarships for the students of his alma mater for next 30 years. He has graduated from the Dongguk University's department of film and theater.

Park said on his homepage bulletin board on December 31st that he will select a student every year to give 50% of the tuition for two semesters for the next 30 years. He said that he wanted to do something that he won't regret five years down the road. Park also added that starring in the acclaimed drama, "Painter of the Wind", was one of those things, and founding a scholarship was another.

Park has been banned from TV by drama producers and TV stations for demanding exorbitant amount of money for starring in dramas. Some say that he was unfairly made into a scapegoat of the TV stations' budget cutbacks, because there were many other actors who were paid more than they deserved.