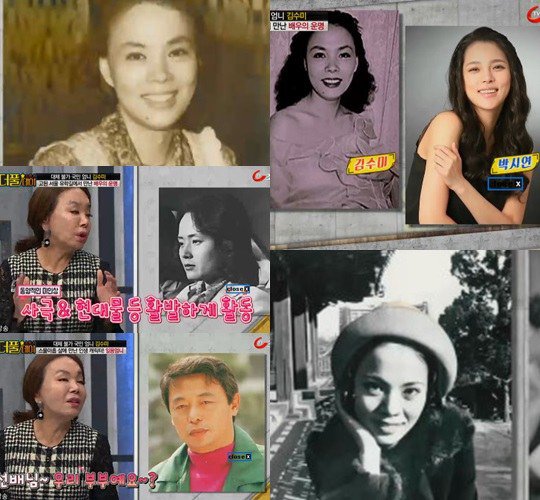 She talked about how she became an actress. She said she cried after hearing poet Han Yong-woon's poem about not being able to call a country 'my own' from her father. Then she wanted to become a writer but after her parents passed away, she wasn't able to pay for college. Her professor told her to go to MBC to meet a friend of his and that was a producer who offered her an audition.

Pictures of the actress when she was young show how beautiful she was. She looks like Park Si-yeon in some ways.

However, Kim Soo-mi said she suffered a long time of nameless days because of her 'beauty'. There was no one like her during those days and she was too good looking to play small roles like a maid. Kim Young-ae debuted about the same time she did and her face was suitable for any role.

Kim Soo-mi starred in "A Man's Season" and won various awards. She was famous before she became Il-yong's mother. She was 29 when she played the grandmother role.

She didn't know what role she was getting into. She thought Park Eun-soo was going to be her husband but he became her son.

"Park Si-yeon, a Kim Soo-mi look-a-like"
by HanCinema is licensed under a Creative Commons Attribution-Share Alike 3.0 Unported License.
Based on a work from this source