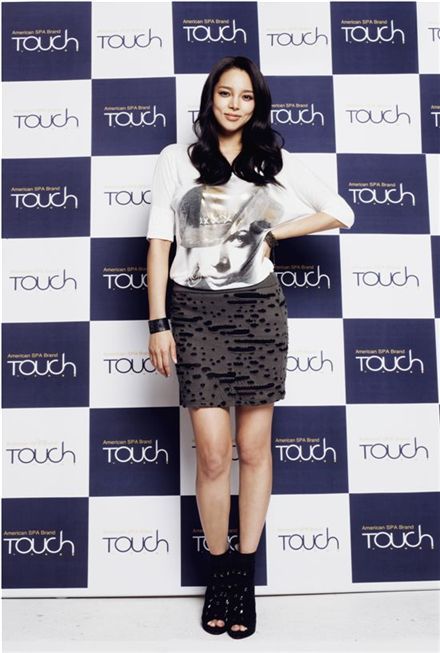 Korean actress Park Si-yeon will be taking on the role as a creative director for U.S. fashion brand TOUCH, according to U.S.-based Korean fashion company Moeim Style.

Moeim Style announced in a press release that the actress, as creative director, will be overseeing the entire planning process, from design to distribution to production, of the brand's celebrity fashion line starting this upcoming fall/winter season.

With Park, TOUCH will introduce and bring in lesser-known, premium U.S. fashion brands to Korea with reasonable prices and in high quality.

"We are adding my sense of fashion to American-style designs", the actress was quoted as saying. "This will get rid of the difficulties that Korean women have had in wearing U.S. brands and we are focusing on showing clothes that are both stylish and wearable".

The 'celeb line' that fashionista Park will be handling includes brands Tulle, Line & Dot, 213 and MK2K, and will be sold in Korea as well as in the U.S. through local department stores.

In Korea, it will be available at the TOUCH store in Seoul's Myung-dong district and Hyundai Department Stores at Coex Mall, Shinchon U-PLEX and Mokdong-district.

The actress will also be unveiling her new fashion line in the August 6 issue of Korea's celebrity newspaper magazine "High Cut". The fashion spread, titled "Chic & Heartful", will feature various fashion items, from trendy to basic styles, for the fall season.

Park, 31, made her debut in the entertainment industry after placing second runner-up at the 2000 Miss Korea pageant. She has since appeared in many television dramas and films, most recently in "Coffee House" (SBS, 2010) and "Marine Boy" (2008).

"Park Si-yeon turns creative director for U.S. fashion brand "
by HanCinema is licensed under a Creative Commons Attribution-Share Alike 3.0 Unported License.
Based on a work from this source