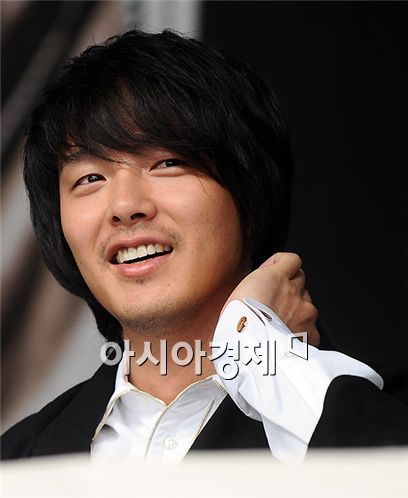 Korean actor Park Yong-ha is set to star in the small screen adaptation of legendary Hong Kong pic "Comrades, Almost a Love Story", according to the film's producer Verdi Media on Wednesday.

Verdi announced that the actor has been cast as the male lead for the Korean remake while producers are still looking for an actress to play the main female character opposite Park.

"The film 'Comrades, Almost a Love Story', which was praised by three billion Asians, will be reborn as a high-quality Hallyu drama through the hands of the best Hallyu writer, producer, actors and crew", an official at Verdi was quoted as saying.

"Comrades, Almost a Love Story", which starred top Hong Kong movie stars Maggie Cheung and Leon Lai, was the top-grossing foreign film when it was released in Korea in 1997. The film is an epic love story between two Chinese mainlanders who meet and fall in love in Hong Kong.

The local TV version, which will go into shoot around late July, is scheduled to air in Korea at the end of the year.

Park, 32, gained popularity throughout Asia after appearing in "Winter Sonata", a drama that first started the Hallyu craze, alongside top actors Bae Yong-joon and Choi Ji-woo.

He has also led a successful singing career in Japan where he has placed several albums within the top 10 ranks of the Oricon charts and won four consecutive Japan Gold Disc Awards.

"Park Yong-ha to star in Hong Kong pic "Comrades, Almost a Love Story" TV remake"
by HanCinema is licensed under a Creative Commons Attribution-Share Alike 3.0 Unported License.
Based on a work from this source