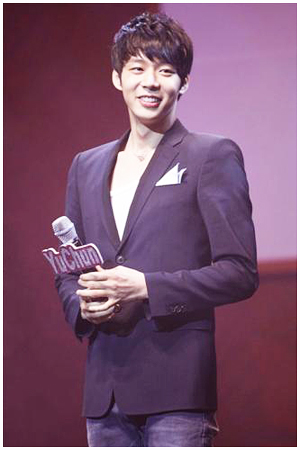 Park Yoo-chun of the group JYJ, who is appearing in the SBS drama "The Rooftop Prince", held a fan meeting event with his Japanese fans. According to his agency C-Jes Entertainment on April 2, Park Yoo-chun spent time with 500 of his fans from Japan at Yonsei University Centennial Hall on March 31. During the two-hour event, his Japanese fans spent a pleasant moment with Park while listening to Park Yoo-chun's recent news and making Kimbab together. A person who participated in organizing the event said, "Park Yoo-chun has been vastly popular in Japan as his previous drama "Sungkyunkwan Scandal" had already gained huge popularity in Japan, and the other drama 'Miss Ripley', which was recently broadcast in Japan, also achieved great success".

In addition, the cast members of "The Rooftop Prince" including Jung Suk-won, Choi Wooshik, and Lee Tae-ri made a sudden visit to the event hall without prior notice, which entertained the fans. Park Yoo-chun said, "I really appreciate the fact that many Japanese fans came to see me even though the new drama has just begun. There will be a pleasant love story in the drama, and I want you to watch the following episodes".

"Park Yoo-chun Holds Fan Meeting with Japanese Fans"
by HanCinema is licensed under a Creative Commons Attribution-Share Alike 3.0 Unported License.
Based on a work from this source