Park Yoo-chun, since when did you start being so good at this? 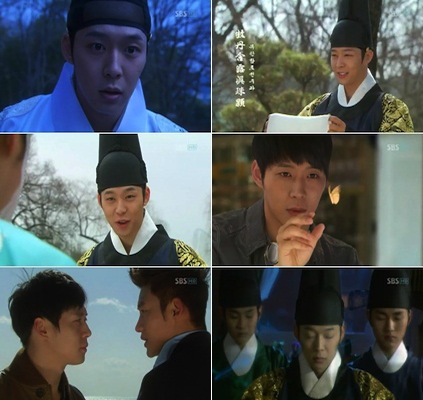 Park Yoo-chun in the SBS drama "The Rooftop Prince" pulled off the charismatic, romantic and comic act at the same time.

"The Rooftop Prince" that was aired for the first time on the 21st drew attention with the scenario of Lee Gak (Park Yoo-chun) a prince traveling 300 years into time and ending up in the modern day.

Feeling anxious, Lee Gak woke up from his sleep in the middle of the night and called for his servant. Turns out his Princess Hwa-yong's (Jung Yoo-mi) dead body was found in the palace pond. Lee Gak cried inn sorrow and tried to convince his servants with charisma that she was murdered.

He did well romantically too. He read poems to Hwa-yong while taking walks around the palace. When Hwa-yong's little sister Boo-yong (Han Ji-min) responded to his poem, he smiled a 'flower smile'.

He hit the climax with his comic act. Lee Gak and the trio (Lee Tae-ri, Jung Suk-won and Choi Wooshik) were on their horses when a strange phenomenon took them 300 years into time and into Park Ha's (Han Ji-min) rooftop house in Seoul. Han Ji-min was surprised and threatened them with a frying man and Lee Gak who was also scared made a confused face. In the preview of the second episode, he even drooled at the noodles a student was eating and showed the comical side of this prince character.

Those who have seen his act say, "When did he get so good at this?", "Today's MVP is Park Yoo-chun", "Yuchun makes us cry and laugh!" and more.

Park Yoo-chun transformed into an actor through the 2010 KBS 2TV drama "Sungkyunkwan Scandal" and went through MBC drama "Miss. Ripley" and now "The Rooftop Prince". It's too soon to say but it seems like he's had a good start so far.

"Park Yoo-chun, since when did you start being so good at this?"
by HanCinema is licensed under a Creative Commons Attribution-Share Alike 3.0 Unported License.
Based on a work from this source