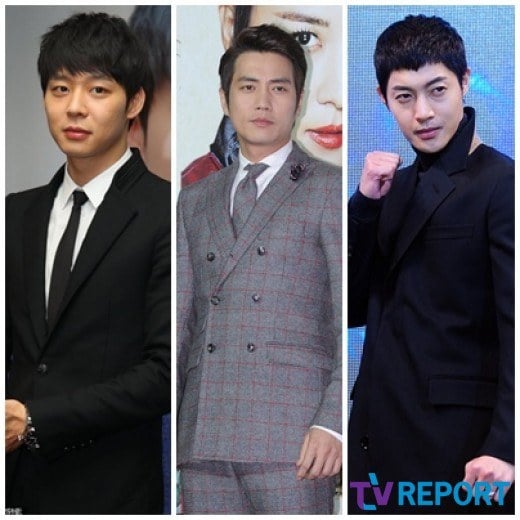 Don't be upset that you won't be seeing Do Min-joon and Cheon Song-I anymore. There are others for you to feast your eyes on. They don't have the power to stop time and teleport, but they will be able to make your heart beat like no other. Park Yoo-chun and Joo Sang-wook are in the waiting line and there is also Kim Hyun-joong who is already out there.

Will Park Yoo-chun break the precedent of political dramas?

Park Yoo-chun chose the Blue House. He takes on the role of Han Tae-kyeong, the bodyguard of president Son Hyun-joo (Lee Dong-hwi) who is kidnapped in the new SBS drama "Three Days". He has the instincts of an animal. He admires Ahn Joong-geun and Yoo Gwan-soon which shows how deep his patriotism is.

He is the only one out of the three male actors that is paired up with another man. He is going to appear frequently with Son Hyun-joo, who plays the president. Obviously, the pressure which lies behind the fact that he has to work with a veteran is a tremendous privilege.

Fortunately, Park Yoo-chun's time comes right after "You Come From the Stars". He should be able to maintain steady level of percentage unless there is a great fluctuation in the ratings.

However, Korean political dramas are known to be pretty uninteresting. Looking at failed examples like KBS 2TV "The Prime Minister and I" and SBS "All About My Romance" is not comforting. It's textbook of having to satisfy Koreans' needs for more romance. The first broadcast is on the 5th of March at 10PM.

It's a mistake if you think Joo Sang-wook only has the section chief image in him. This time, he's going to be the 'transformer' from cheesy divorced man to a successful CEO. He stars in the new MBC drama "Sly and Single Again" with Lee Min-jung.

He takes on the role of the president of his own venture company. He wasn't always this successful. He was a loser who gets divorced from his wife but then meets wealth right away. The drastic way he changes is something to keep an eye out for.

Joo Sang-wook is going to be seen in various characters through this drama; from a bar-student to a loser husband and broke divorcee. And then, he becomes a successful businessman.

Joo Sang-wook appears as one person but it'll be like acting out many characters. The first episode will be seen on the 27th at 10PM.

When KBS 2TV "Inspiring Generation" started off, not many foresaw its success. However, despite the pressure from "My Love from the Star" and "Miss Korea", it has managed to maintain a rating above 10%.

It's been a while since "Inspiring Generation" beat "Miss Korea" by double its percentage in ratings. And the end of "My Love from the Star" is its only hope and opportunity to make it big. Kim Hyun-joong has the fate of the drama in his hands.

Subsequently, it's going to be tough with "Sly and Single Again" and "Three Days" starting almost at the same time, and it may become tougher now that "Inspiring Generation" has made it about halfway and reviews about Kim Hyun-joong are only getting better.

"Park Yoo-chun vs. Joo Sang-wook vs. Kim Hyun-joong"
by HanCinema is licensed under a Creative Commons Attribution-Share Alike 3.0 Unported License.
Based on a work from this source