Peek Into the Hard Work Behind the Scenes of "Haechi" 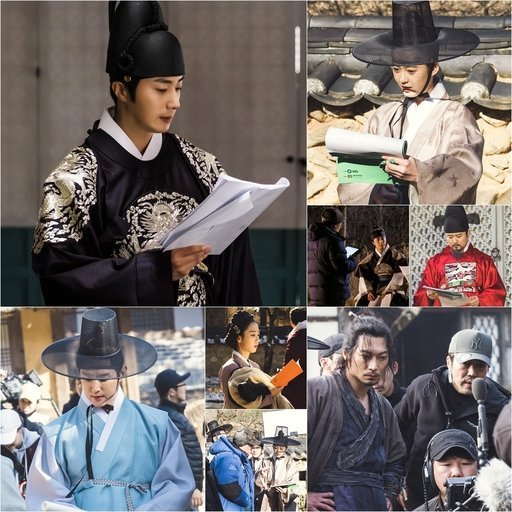 "Haechi" is one of the leading Monday/Tuesday dramas with its dynamic layout, detailed story and the outstanding performances of the cast. Particularly, the process of Jung Il-woo as Yi Geum rectifying corruption by destroying the ills of Joseon in the midst of a sharp partisan strife is exciting and satisfying.

Meanwhile, the behind-the-scene pictures of Jung Il-woo, Go Ara as Yeo Ji, Kwon Yool as Park Moon-soo, Park Hoon as Dal Moon, Lim Ho as Yi Gwang-ja, and Park Ji-yeon-I as Cho Hong steal the show as the cast is engrossed in their scripts around the clock.

Jung Il-woo seems to be possessed by his character of Yi Geum the moment he holds his script. He gives off a wave of charisma as if determined to not let a single word go.

Go Ara looks beautiful even while she's reading her lines. She discusses matters with Director Lee Yong Suk every chance she gets and shows her affection for her role.

Kwon Yool is concentrating on image training. He's a comical yet traditional character, but his performance doesn't come without effort.

"Peek Into the Hard Work Behind the Scenes of "Haechi""
by HanCinema is licensed under a Creative Commons Attribution-Share Alike 3.0 Unported License.
Based on a work from this source