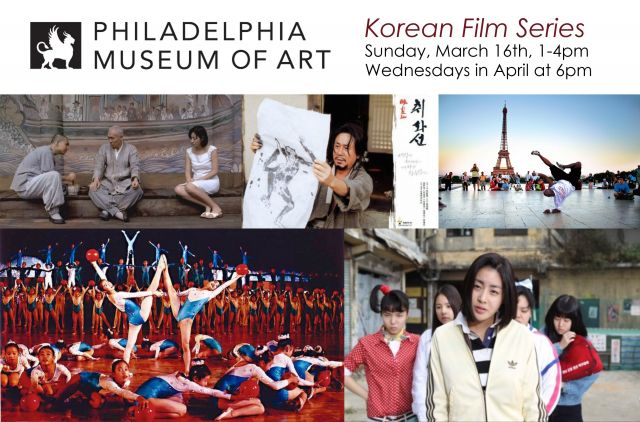 Featuring a mix of contemporary films, documentaries, and classics, this series showcases traditional and modern Korean culture with themes explored in the exhibition Treasures from Korea: Arts and Culture of the Joseon Dynasty, 1392-1910.

Each film is introduced by Joe Kim, founder of the Philadelphia Asian American Film Festival. Discussions with experts in Korean film and history follow most screenings.

$8 (Free for museum members and students with valid ID)

April 9: "Sunny - 2010"
An unexpectedly big hit in South Korea, "Sunny - 2010" is a heartwarming coming of age comedy that will alternately make you laugh and cry as these long-lost friends discover they can still change one another's lives. Featuring a soundtrack of American 80's pop hits. Feel free to come dressed in your 80's best!

April 16: "Spring, Summer, Fall, Winter... And Spring"
Award-winning Korean writer/director/editor Kim Ki-duk has crafted a lushly exotic, yet universal story about the human spirit and its evolution, from innocence to love, evil to enlightenment, and ultimately to rebirth.

April 23: "Planet B-Boy"
Korean-American filmmaker Benson Lee (who grew up in Philadelphia) sought to answer the question of how South Korea became the epicenter of the global phenomenon known as breakdancing, which originated in the Bronx in the 1970s. Weaving between the vivid backdrops of Osaka, Paris, Las Vegas, and Seoul, unforgettable images frame the intimate stories of international teams of dancers who struggle to fulfill their dreams. Featuring a b-boy performance after the film.

April 30: "The Yellow Sea"
Screened in the Un Certain Regard section at the 2011 Cannes Film Festival, "The Yellow Sea" is an impressive crime thriller with amazing action reminiscent of the Bourne series from director Na Hong-jin ("The Chaser").

"Philadelphia Museum of Art Korean Film Series"
by HanCinema is licensed under a Creative Commons Attribution-Share Alike 3.0 Unported License.
Based on a work from this source