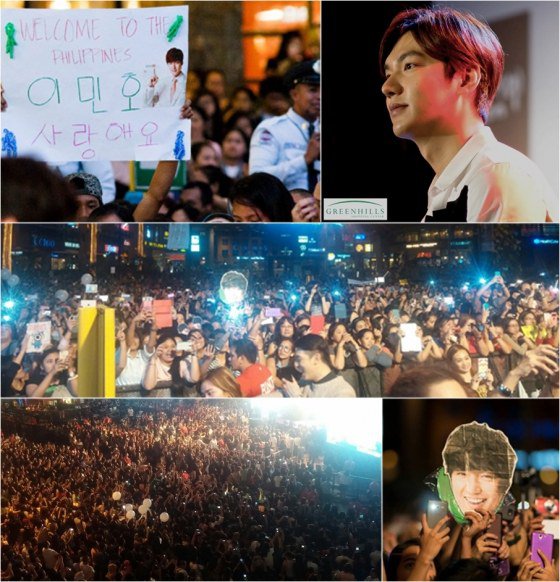 Lee Min-ho is a superstar in the Philippines.

Lee Min-ho arrived in the Philippines on the 24th to meet with fans at the Kyochon Chicken event which is the global face for. About 10,000 fans came to the event and more people gathered around outside the building which drew a police force due to safety reasons.

The 2009 drama "Boys over Flowers" star Lee Min-ho's popularity is beyond imaginable in the Philippines. Local media compliment his never changing manner despite the years and claim that the local population is learning about Korea through him.

Star House claimed, "The crowd that gathers to see Lee Min-ho is made up of different races and people but they all show their love with perfect Korean. They get better every year and it's really surprising".

Lee Min-ho's first leading movie "Gangnam Blues" is due for released on the 4th of March. Lee Min-ho is the first star to hold a record of 2 million viewers in 2015 so far and the word has spread all the way to Asia and even Australia.

Lee Min-ho's character song "Anak" is sung by a Filipino singer named Freddie Aguilar and is expected to have a friendly approach to Filipino fans.

"Philippines, "Lee Min-ho's visit is a public holiday""
by HanCinema is licensed under a Creative Commons Attribution-Share Alike 3.0 Unported License.
Based on a work from this source