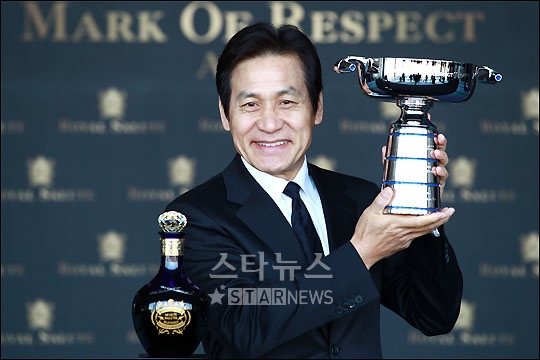 Actor Ahn Sung-ki, who was awarded the winner at the 6th "Mark of Respect" in Seoul on the 9th by Pernorica Korea's (Chairman Frank Lapeyre) luxury scotch whisky brand, Royal Salute, is holding up a trophy shaped like the traditional Scottish whisky glass Quaich.

"Mark of Respect" has contributed in internationally promoting Korean culture awarding director Park Chan-wook in the 1st, professor Lee Eo-ryeong in the 2nd, writer Hwang Seok-young in the 3rd, conductor Jeong myeong-hoon in the 4th and photographer Kim Joong-man in its 5th event, and has been positioning itself as a powerful cultural awards with value and respect.

"[Photo] Actor Ahn Sung-ki the most respected cultural artist"
by HanCinema is licensed under a Creative Commons Attribution-Share Alike 3.0 Unported License.
Based on a work from this source