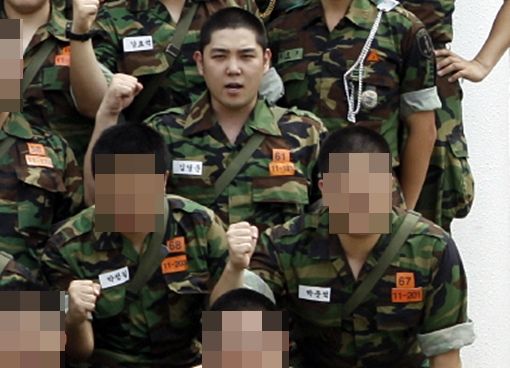 A photograph of Super Junior member Kangin has been revealed for the first time since his entering the Korean military last week as part of fulfilling Korea's mandatory military duties.

The Nonsan military camp in South Chungcheong Province on Tuesday released a picture of the pop idol, who entered the military on July 5 and is currently undergoing five weeks of basic training.

In the photo, the singer is seen wearing a military uniform which bears his real name 'Kim Young-woon' and is making a fist with right hand amongst fellow trainee soldiers at the camp.

Kangin, 25, is one of the 13 members of popular idol group Super Junior but he recently withdrew from group activities and did not take part in recording the band's latest album "BONAMANA".

He had made headlines last October when he was caught drunk driving and fleeing the scene after colliding into two taxis. He turned himself into police several hours later, and was later summarily indicted with a fine of eight million won charged by the Seoul Central District Court.

The singer will be assigned to a military base, where he will serve for the next twenty months, after he wraps up training at Nonsan.