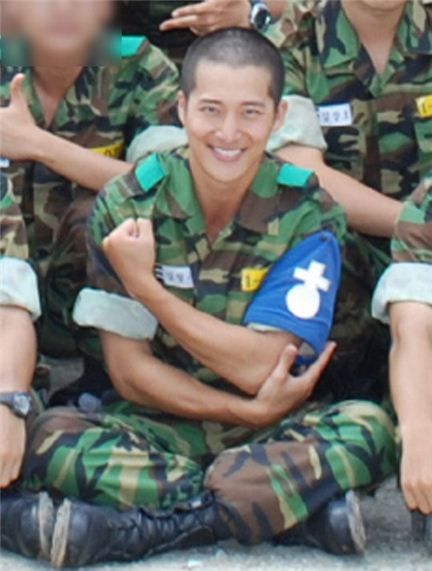 A new photograph of actor Lee Wan, in his third week of training as part of fulfilling the country's mandatory military duties, has been revealed on the Korean Army's website.

The Nonsan military camp in South Chungcheong Province on Tuesday posted a photo of the 26-year-old actor on a section titled 'Search for Faces We Miss' on its official website (http://www.army.mil.kr).

In the picture, Lee is seen smiling mischievously while posing as if showing off his armband indicating that he is a platoon leader.

Lee, whose real name is Kim Hyung-soo, had been looking for a new acting project when he was notified of his drafting to the military which he entered on July 12. He will serve as an active-duty soldier after completing five weeks of basic training.

The actor had first risen to stardom through his debut role in TV series "Stairway to Heaven" (SBS, 2003), which starred Hallyu stars kwon Sang-woo, Choi Ji-woo and his sister Kim Tae-hee.