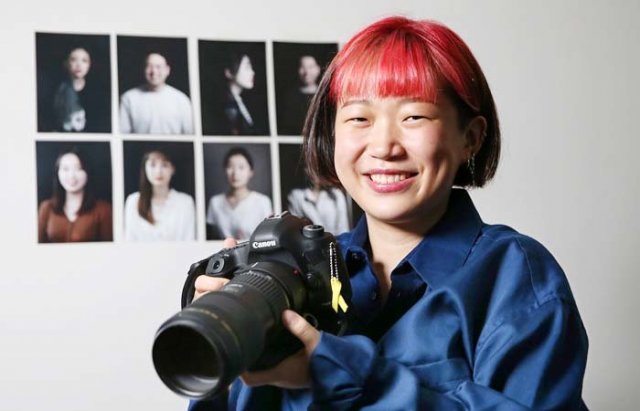 Photographer Hong San poses in her studio in Seoul on Nov. 10.

The pictures on the walls of a small studio in Seoul are portraits of people with a range of facial expressions and in a variety of poses, from solemn to cheerful, some making the V sign. All are ostensibly funeral pictures of young people who are in fact a long way from death.

Hong San's unusual project is taking "memorial" photos of people in their 20s and 30s, which she does on weekends while working for an advertising company on weekdays.

Hong says she prefers to earn her living another way because she does not wish to be dependent on the fickleness of the art market.

She began taking the memorial pictures early last year. While trying to find a job, she suffered from insomnia and started to think about death.

"I said 'I want to die' all the time back then, and I thought about how I would want to be remembered if I died at that moment. And I wanted to answer the question with photos, which seemed the best way for me", she explains.

Her photos are surprisingly popular. Some 75 young people have visited her studio in the two months since she started the project. She has even appeared on a TV show.

Asked why young people are interested in funeral photos, she said, "Society wants young people to keep trying and never give up, but in reality it gets harder to get a job no matter how hard they try".

"Although they don't actually die, young people seem to suffer a psychological death due to frustration".

Hong makes her subjects write their wills and talks with them for nearly an hour.

"I give them time to think because I want to offer them a unique experience rather than just take a picture", she said. "Even those who feel awkward about posing for a simple identification photo can show the most natural expression after taking some time to think".

"Photographer Takes 'Funeral' Pictures for Young People"
by HanCinema is licensed under a Creative Commons Attribution-Share Alike 3.0 Unported License.
Based on a work from this source