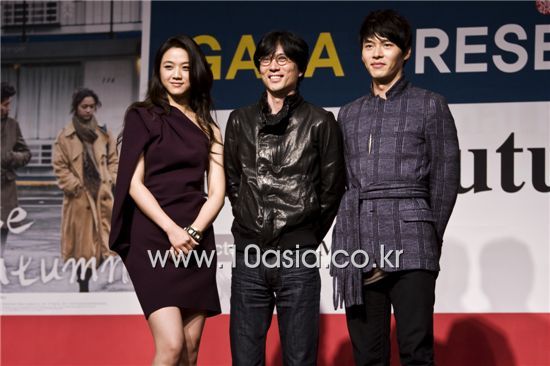 Chinese actress Tang Wei has said that "Late Autumn - 2010", her collaboration with Korean actor Hyun Bin, is a film that makes her "heart race".

The starlet of Venice's Golden Lion award-winning pic "Lust, Caution" made the remark at a press conference for "Late Autumn - 2010" on Friday in Busan, where the pic is being screened as a Gala Presentation at the ongoing 15th Pusan International Film Festival (PIFF).

"'Late Autumn - 2010' is a very exciting film which makes my heart race. There are certain things that still pop into my mind when I think of my character", the 31-year-old actress said of the film.

She further explained, "Those of you who have watched the movie will know but 'Late Autumn - 2010' is a very delicate piece so I decided to appear in it because I thought it would be a challenging film as well my role being one that I very much wanted to play since it's a classic masterpiece".

In the English-language remake of a 1960s Korean film of the same name by director Lee Man-hee-I, Tang Wei plays a Chinese woman on a 72-hour leave from a prison after being jailed for killing her abusive husband.

During that brief time, she falls in love with a Korean man, the role taken by Hyun Bin, whom she encounters on a bus on her way to Seattle. The man is a gigolo who is constantly on the run from being chased by the husband of the woman he is having an affair with.

While Tang Wei admitted the language barrier made it difficult to work with her co-star despite it being another one of the main reasons she took on "Late Autumn - 2010", she said she "came across the powerful realization that the eyes, mouth and even the hands and feet are all speaking". 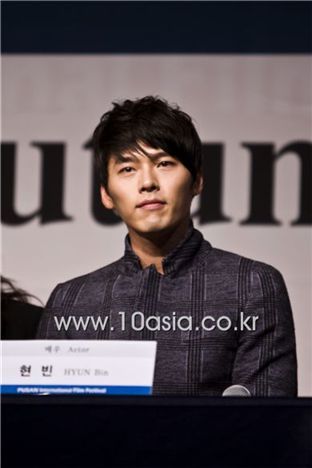 Director Kim Tae-yong remarked happily that such an obstacle between the two actors worked better with the film because they had to read each other's eyes to play their roles which helped reinforce the image of two strangers falling in love. "It helped them express their emotions with more delicacy", he quipped.

Tang Wei, 31, has pointed to making a full-fledged return to the big screen -- her Cantonese romance "Crossing Hennessy" was released in April this year and she has been cast as Mao Zedung's girlfriend in a propaganda movie marking the 90th anniversary of the Chinese Communist Party next year.

"Lust, Caution", Ang Lee's espionage thriller, placed her onto international stardom but also into a two-year hiatus in China due to her sexually explicit scenes in the movie.

Hyun Bin rose to fame after starring in smash hit series "My Name is Kim Sam-soon" alongside actress Kim Sun-ah in 2005 and has since appeared in a steady stream of films and dramas.

"[PIFF] Tang Wei's "heart races" at thought of "Late Autumn - 2010""
by HanCinema is licensed under a Creative Commons Attribution-Share Alike 3.0 Unported License.
Based on a work from this source