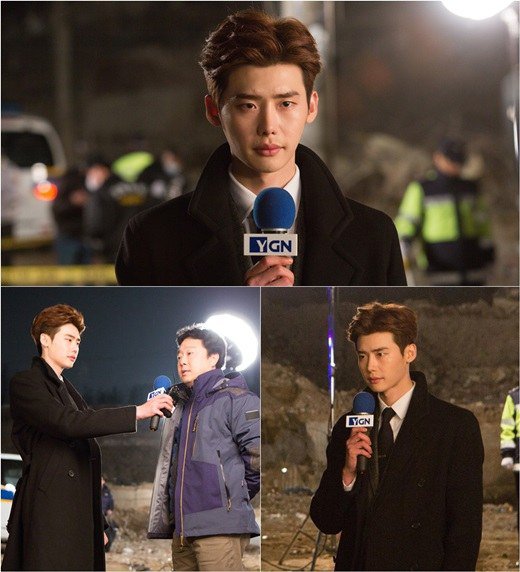 Stills were released of Lee Jong-suk in a neat suit while holding a microphone.

In the pictures, he's reporting the news with a mic that has the logo, YGN. He looks very neat and sophisticated and has successfully turned into a reporter. This contrasts to the time when he was a junior reporter, with his messy hair, going around and collecting news.

Choi Dal-po's (Lee Jong-suk) transformation brings about curiosity as to what happened; did he officially make the reporter status? There's resolution in his eyes as he stares right into the camera.

The location where he is also draws attention. He is out in an empty lot covered in dirt and behind him are police seemingly investigating a case. Dal-po is also interviewing Jeong Ki-bong (Park Soo-young), the chief of the detective squad.

The "Pinocchio" production team says, "This week's episode will broadcast Dal-po's first news report. More interesting stories are to follow. Lee Jong-suk was very careful about the tone of his voice, his gestures and even look for the perfect reporter look".

Meanwhile, "Pinocchio" is about a man who lives a lie and a woman who can't lie.

""Pinocchio" preview: Lee Jong-suk is officially a reporter"
by HanCinema is licensed under a Creative Commons Attribution-Share Alike 3.0 Unported License.
Based on a work from this source