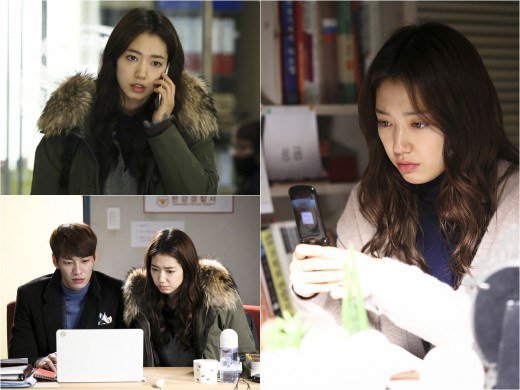 It seems like Park Shin-hye has started investigating a case with a 'mystery cell phone'.

On the fifteenth episode, In-ha didn't care about her foot bleeding, instead she was thinking about Chan-soo (Lee Joo-seung) who was framed by her own mother Cha-ok's (Jin Kyung) media play. Afterwards, she heard there was a CCTV footage that might solve the misunderstanding. What will she do next?

Stills of In-ha show her with a lamp light on, looking into a folder phone. Her expression shows how puzzled she is and raises questions for the phone in her hand.

Aftewards, she's on the phone with a serious look on her face. It looks like she's discovered something.

In-ha and Beom-jo (Kim Young-kwang) are looking at one of the pictures on a laptop. She looks as if she's been greatly shocked by something and at the same time, her face looks bitter.

The "Pinocchio" production team says, "In-ha is about to find out the truth about her mother and is going to investigate more. We hope you stay tuned to the last five episodes of the drama".

Meanwhile, "Pinocchio" starring Lee Jong-suk, Park Shin-hye, Kim Young-kwang and Lee Yoo-bi, is about a man who lives a lie and a woman who can't lie.

""Pinocchio" preview: Park Shin-hye has Jin Kyung's cell phone"
by HanCinema is licensed under a Creative Commons Attribution-Share Alike 3.0 Unported License.
Based on a work from this source