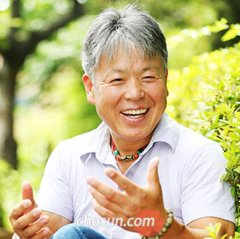 Korean mountaineer Um Hong-gil, the first man to conquer the world's 16 highest peaks over 8,000 m, established a foundation in his name in May 2008 to build 16 schools in remote parts of Nepal. He recently returned to the Himalayan country to attend a groundbreaking ceremony as the project approaches its halfway mark.

"Because the mountains themselves seemed to help me succeed in climbing the 16 peaks in the Himalayas, I wanted to repay the people there by helping those in need", said the 53-year-old.

"If setting up 16 schools is akin to climbing the 17th peak in my life, I've come halfway", he said as he paved the way for work to begin on the eighth school, located in the Gori region.

The first school was completed in Pangboche in 2010, the second in Tarphu in 2011, the third in Lumbini in 2012 and the fourth in Birethanti this February. Three others are being built in Darding and Shantipur.