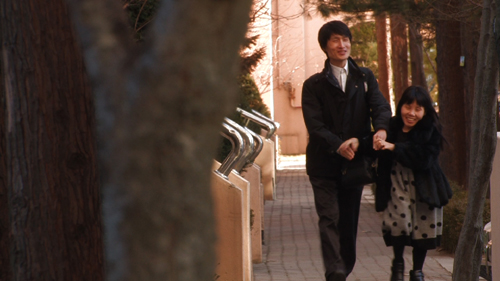 "Planet of Snail" is an innovative documentary about a deaf and blind young man who works through his isolation from the world to find friends, write poetry, fall in love and get an education.
The documentary also screened at the 12th Jeonju International Film Festival (JIFF). "Planet of Snail" previously won production grants from Sundance and the EBS International Documentary Film Festival (EIDF) and was pitched at the IDFA Forum last year.
Screendaily.com reports the film was sold by CAT & Docs and that it is expected to get a theatrical release in the UK in the coming months.
"Planet of Snail" director Yi Seung-Jun's other credits include "Children of God"(2008) and "Flowers, Two Women's Story"(2007) as well as "Invisible War - India Bihar Report" (2000).
Also at the IDFA, the Palestine/Israel co-production 5 Broken Cameras, directed by Emad Burnat and Guy Davidi, was given a Special Jury Award. A personal portrait of a Palestinian village resisting Jewish settlements encroaching on their lands, the film also won the Publieke Omroep IDFA Audience Award.
The NTR IDFA Award for Best Mid-Length Documentary, which comes with a € 10,000 cash prize, went to Montenegro by Jorge Gaggero (Argentina) while the IDFA Award for First Appearance (€ 5,000) went to The Vanishing Spring Light by Xun Yu (China/Canada).
The IDFA was held Nov. 16 – 27 this year, screening 327 titles with 88 world premieres.