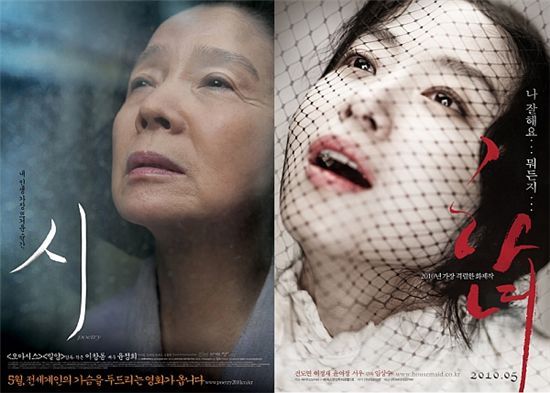 Korean films "Poetry" and "The Housemaid - 2010" have been announced as entries in the official competition for this year's Cannes Film Festival, according to their respective production companies on Friday.

The final list was unveiled Friday by Thierry Fremaux, the artistic director of Cannes, revealing that Lee Chang-dong's drama "Poetry" and Im Sang-soo's "The Housemaid - 2010" will be competing up against other noteworthy films in the annual fest which kicks off May 12.

"We had high expectations for "Poetry" the moment director Lee received an email from Fremaux who wrote to him after reading the translated script and said the movie is sophisticated yet simple", executive director Park Min-jung of Uni-korea explained.

Jason Chae, CEO of Mirovision, was quoted as saying in a press release, "We were worried about having sent in the movie which needed some finishing touches but are relieved after receiving good news about "The Housemaid - 2010"".

"Poetry", helmed by renowned director Lee, is about an elderly lady who begins to take poetry classes and writing her own poems while fighting Alzheimer's.

This will be Lee's second time taking part in the film fest -- his movie "Secret Sunshine" starring actress Jeon Do-yeon won the award for best actress in 2007.

"The Housemaid - 2010", a remake of the late Kim Ki-young's 1960 classic "The Housemaid - 1960", is about a young housemaid who begins working for an upper class family and has an affair with the man of the house.

""Poetry", "Housemaid" to compete at Cannes Film Festival"
by HanCinema is licensed under a Creative Commons Attribution-Share Alike 3.0 Unported License.
Based on a work from this source