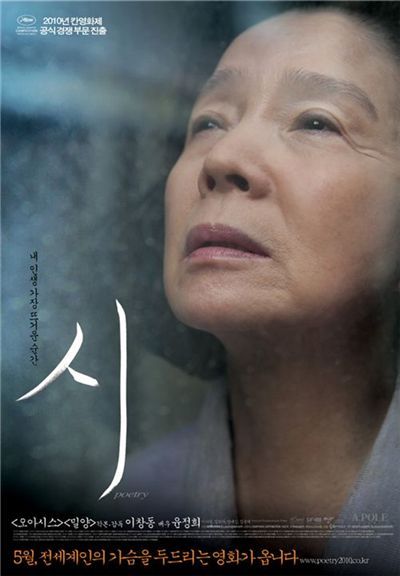 The film, which won the award for best screenplay at this year's Cannes Film Festival, was picked up by distributors in Hong Kong, Syria, Japan, Portugal and Spain.

Earlier in the year, the picture had been sold to nine countries including Taiwan, Spain, Greece, Russia, former Yugoslavia, Benelux, and Brazil, during the Cannes Film Market held concurrently with the Cannes Film Festival.

Starring veteran actress Yoon Jung-hee, "Poetry" is about an elderly woman who learns how to write her own poems while fighting Alzheimer's and was released in Korea in mid-May.

Available on DVD at YesAsia

""Poetry" picks up most deals for Korean pic at Busan film market"
by HanCinema is licensed under a Creative Commons Attribution-Share Alike 3.0 Unported License.
Based on a work from this source