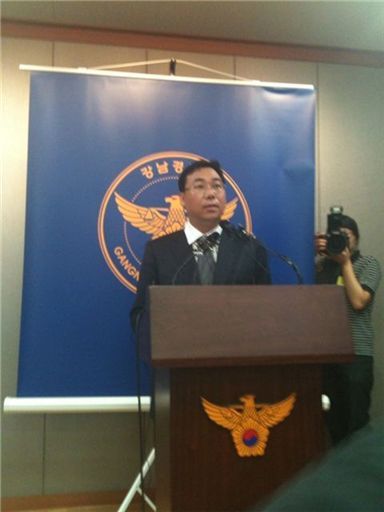 Police have officially announced suicide is the cause of singer and actor Park Yong-ha's death. Park was 32.

Chief investigator Kwak Jeong-hee at Gangnam Police Station gave a briefing on Wednesday afternoon, declaring that Park died of suffocation early in the day after hanging himself from the cord of his camcorder's charger that he had hung to the top of his bedpost.

Kwak however, dismissed reports claiming that Park took his life from depression or problems he had related to taking sleeping pills for 14 years. "We were able to confirm that he had recently taken some pills although we do not know if it was after he got home last night. Nevertheless, it is unrelated to the cause of his death", Kwak explained.

Police were also unable to find any indications of financial or health related issues nor discover a memorandum on his recent thoughts or a suicide note.

However, for the past few days Park had confessed to his acquaintances that "both work and life are tough", asking to talk again after he had organized his thoughts.

Also, upon arriving at home past midnight after yesterday after drinking, Park had apologized to his father, close to tears, "I'm sorry, I'm sorry, I should be the one in pain, not you". Park's father has been diagnosed with late-stage stomach cancer and Park, a devoted son, was in agony over his father's illness.

Kwak added that the actor had taken sleeping pills on several occasions after finding difficulty in falling asleep from having to juggle his business as the CEO of his own agency YONA Entertainment, creating new businesses and pursuing his singing and acting career.

"Based on the testimonies, we are assuming that Park committed suicide on impulse after drinking from stress over his father's illness, his business and entertainment career", Kwak stated.

Park was discovered by his mother at 5:30 a.m. at his house today after he had taken his life. Police presume Park died around 3:00 a.m.

Park, who debuted as an actor in 1994, gained popularity throughout Asia after appearing in "Winter Sonata", a drama that first started the Hallyu craze, alongside top actors Bae Yong-joon and Choi Ji-woo.

He also led a successful singing career in Japan where he placed several albums within the top 10 ranks of the Oricon charts and won four consecutive Japan Gold Disc Awards.

Most recently, he had been set to star in the small screen adaptation "Love Song - Drama" of legendary Hong Kong pic "Comrades, Almost a Love Story", across actress Yoon Eun-hye.

He was on a brief visit to Korea this week while on a three-month long 16-city tour in Japan starting last week.

Below are excerpts from the Q&A session of the police briefing.

Q: Had he drank a lot when he took his life?
A: He was under the influence of alcohol when he returned home after midnight on the night of his death. According to his father, he did not drink a lot but a little.

Q: Did you carry out an autopsy?
A: The family of the deceased do not want one. This means that they too do not have any questions over the cause of his death.

Q: Was he under a lot of stress over his father's illness?
A: Investigation showed that Park treated his parents well and was the type who is affectionate. He had told his acquaintances many times that he is extremely distressed about the process of his father's fight against the disease.

Q: Did he not have any financial issues?
A: We do not investigate into one's financial standing when dealing with a death.

Q: Are you sure there was no will?
A: We looked at the notebooks and belongings in his room but we could not find anything which could be considered a will.

Q: What about love issues?
A: Nobody has said he had such issues.

Q: Did you investigate into his phone call records?
A: We got hold of his mobile phone but he had deleted records of his calls. I think he did it himself. The text messages were still there.

Q: Why did he come to Korea when he's on tour?
A: He visited because of his father's illness.

"Police announce Park Yong-ha committed suicide"
by HanCinema is licensed under a Creative Commons Attribution-Share Alike 3.0 Unported License.
Based on a work from this source