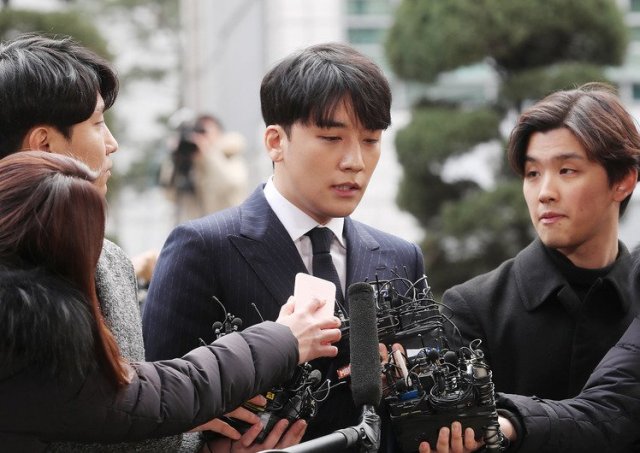 Police are seeking arrest warrants for Seungri of boy band Big Bang and his business partner Yu In-suk, who is married to actress Park Han-byul.

The two men are accused of habitual pimping for potential investors and rich clients in their nightclub business as well as embezzlement in the running of the operation.

"We decided to seek an arrest warrant because Seungri and Yu face heavy charges and there is a risk that they will try to destroy evidence", a police spokesman said on Wednesday.

Police are confident they have solid evidence to make at least one pimping charge stick. The two allegedly provided prostitutes to at least one Japanese investor who visited Korea in late 2015. Yu and the prostitutes confessed during questioning, but Seungri maintains he only paid the stunningly high W30 million hotel fee and was unaware of the pimping (US$1=W1,170).

But police have evidence that Seungri spent time with the investor during his three-day Christmas visit and even stayed at the same hotel.

But there is apparently not enough of a paper trail to show that Seungri flew out a gaggle of prostitutes for guests at a lavish birthday party he threw in Palawan, the Philippines in 2017.

Police also believe they embezzled around W530 million from their posh Burning Sun club in Gangnam by pocketing dividends without proper documentation and siphoning off more money in the form of bogus consulting fees.

Seungri's attorney told the Chosun Ilbo in a telephone interview, "I have not been briefed about the Burning Sun accounting issue, but the consulting fees were paid to cover legitimate services".

The lawyer has submitted a 70-page document protesting his client's innocence.

Seungri and Yu also face charges of violating sanitary codes while running the club, and turning a blind eye to drug peddling and sexual abuse on the premises.

Separately, Seungri is accused of sharing hidden-cam sex videos on a celebrity group chat run by singer Jung Joon-young, who has already been arrested for the charge.

"Police Seek Arrest Warrant for 'Celebrity Pimp' Seungri"
by HanCinema is licensed under a Creative Commons Attribution-Share Alike 3.0 Unported License.
Based on a work from this source