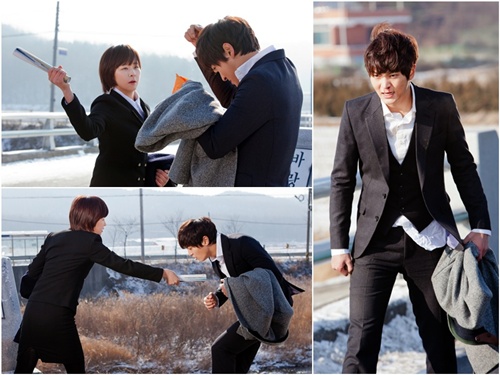 This scene is of the two having an argument on the way to their first day of work at the National Intelligence Agency. Joo Won is beat up by Choi Kang-hee and ends up seeing blood.

The temperature this day went down to a shocking -10 degrees but Choi Kang-hee and Joo Won did their best at 'fighting'. With the endless NG's, Joo Won whined cutely that he 'didn't want to be beat up' anymore.

Despite the fact that Joo Won is a clean cut image of an agent, he doesn't stop winking at women through windows or pour coffee all over himself on a motorbike.

The production claims, "We are curious at how Joo Won will create this comical character after all the serious roles he's done so far".

"7th Grade Civil Servant" is an action romance drama about a group of agents who lie about everything but love. To be aired on the 23rd after "Missing You".

"Poor Joo Won, beat and beat again"
by HanCinema is licensed under a Creative Commons Attribution-Share Alike 3.0 Unported License.
Based on a work from this source