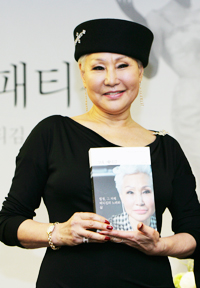 Patti Kim poses with her biography at a press conference in Seoul, Wednesday. / Yonhap

Pop diva Patti Kim has decided to reitre once she completes her farewell concerts this year but fans can find Solace in her new biography penned by fellow singer Jo Young-nam.

After a surprise announcement that she was quitting the stage in February, she met with the press again Thursday to talk about the book titled "Her, Patti Kim".
"There have been talks about a biography for the last 20 years, but it never really appealed to me", said the 74-year-old singer during a press meeting at the Sejong Center for the Performing Arts in central Seoul, Wednesday.

"But when my staff suggested I work with Jo on this project, I thought it was a good idea. We have performed together countless times and I have enjoyed his books".

Jo is an accomplished writer of 18 books. For this one, he conducted interviews for four months at his home in Cheongdam-dong, Seoul, from August to December of last year.

The book follows Kim's pioneering career that has spanned more than 50 years and her personal life.

Since her debut in 1958 at a local U.S. military base, she established herself as one of the nation's first generation of pop icons.
The 74-year-old is recognized for numerous hits that display a multi-tonal range and for impassioned live performances here and abroad.

Her partnership with composer and former late husband Gil Ok-yoon (1927-1995) produced some of the most popular hits in the 1960s and '70s, including "Belove Maria", "Chant for Seoul", and "The Word Love".

Born in Seoul in 1938, Kim grew up at a time when pop culture was virtually non-existent here, which makes her success all the more remarkable.

At a time when many of her contemporaries were still making their living with "trot", the oldest form of Korean pop music developed in the years before and during Japanese occupation (1910-1945), Kim dominated the industry with a modern, versatile technique, charismatic stage presence and a unique fashion sense.

Kim is remembered for many trailblazing performances, like the 1989 concert held at Carnegie Hall in New York. She was the first Korean singer to perform at one of the world's most renowned concert venues.

In 1960, Kim appeared on Japan's NHK-TV, making her the first Korean singer to be formally invited to perform in Japan since the nation was liberated from colonial rule in 1945. A year later, she embarked on a year-long tour of Asia, which took her to Hong Kong, Taiwan, Japan, the Philippines, Thailand and Singapore. She also appeared on "The Tonight Show" with Johnny Carson.

In 2008, she held an international tour to celebrate the 50th anniversary of her career, visiting 50 cities, which included a performance in Pyongyang.

"Pop diva Patti Kim publishes biography"
by HanCinema is licensed under a Creative Commons Attribution-Share Alike 3.0 Unported License.
Based on a work from this source