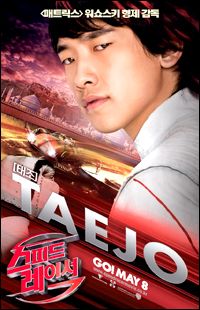 Also known as Bi or Jung Ji-hoon, the 26-year-old will visit six countries, beginning with Korea followed by Hong Kong, the United States, Germany, the United Kingdom and Japan. He will arrive in Seoul April 20 to meet with the press. On the 23rd, he will fly to Hong Kong before joining his co-stars for the Los Angles premiere. Afterward, he will visit Berlin and London and finally Japan in June, said All That Cinema.

'Rain"s hallyu superstardom in Asia is expected to hype up the region's interest in "Speed Racer". The star became well known through his roles in hit TV dramas such as "Full House" opposite actress Song Hye-kyo. He made his big screen debut in renowned director Park Chan-wook's "I'm a Cyborg, But That's OK" (2006), and is currently preparing for his next role in Germany.
____________________________
Rain in a poster for the film "Speed Racer" / Courtesy of All That Cinema

"Pop Star Rain to Promote New Film in World Tour"
by HanCinema is licensed under a Creative Commons Attribution-Share Alike 3.0 Unported License.
Based on a work from this source