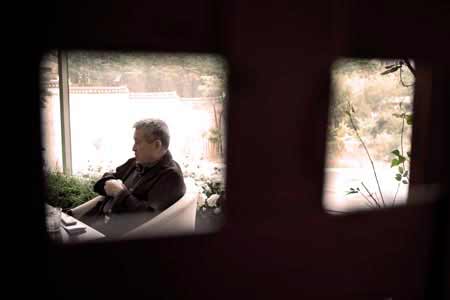 Filmmaker Im Kwon-taek drinks a cup of morning coffee during an interview with The Korea Times at a cafe near his home in Suji, Gyeonggi Province on Sept. 28. / Photography by Jesse Chun for The Korea Times

At 75, the filmmaker continues to explore new ground. "I don't lie in my movies... I simply try to capture what we feel in our everyday lives".

This is the second in a series of interviews with international pioneers among Korean artists, to mark the 61st anniversary of The Korea Times that falls on Nov. 1, and is sponsored by The Korea Press Foundation. ― ED.

SUJI, Gyeonggi Province/BUSAN - It took an extra second to confirm the interview venue with Im Kwon-taek. The filmmaker used "dabang", an outdated word for coffee shop rarely heard outside of retro movies.

While the 75-year-old may not care to update his parlance, he never fails to create new audiovisual languages onscreen. His extensive filmography spells out disparate themes and styles, but his movies share a common tongue in that, like mirrors, they honestly translate all the beauty, grit, joy and sorrow of life. And for this they speak across borders and generations.

"I don't lie in my movies", Im told The Korea Times. "I shoot inspired moments and emotions, rather than rationally dissect a given theme. I simply try to capture what we feel in our everyday lives". 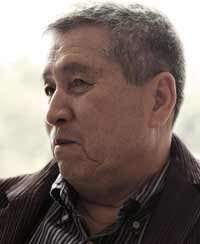 As Im drank coffee in his neighborhood dabang, passersby paid their respect to one of the country's most iconic cineastes. His longevity is unparalleled in the fast-changing local film industry; yet it would be a terrible mistake to call him a legend, as belonging to the past. He may feature handed-down crafts such as "Hanji" (Korean paper) in his movies, but his oeuvre is far from traditional.

In "Chunhyang" (1999) he moved beyond conventional narrative forms by interweaving "pansori" (Korean opera), while "Hanji" (2010), his first HD project, combines fiction and documentary structures in an uncanny way. "Chukje" (1996) is more than a reenactment of time-honored funeral rituals here and explores the paradox in combining Buddhist, Confucian and shamanist values.

An enfant terrible with a Shakespearean sensibility, Im manages to fathom the contemporary meaning of traditions in the context of modern-day Korea while also touching upon universal themes.

But he notes, "There was a time when I made movies almost thoughtlessly". During the 1960s alone he whipped up some 50 films. They were mostly entertainment pieces emulating Hollywood imports that made him a box office favorite.

"I worked with the impassioned goal of raising the level of Korean cinema to that of third-rate American movies. But these were like fake Westerns and had nothing to do with Korea". That is when he decided to make something that only Koreans can, something that mirrors life here and now.

"Koreans have an undying spirit and unrelenting uniqueness. Korean cultural quirks and sense of aesthetics have survived even colonization, war and censorship. I've been thinking a lot about the essence of Korean identity and I think it's 'heung'", he said, referring to the dynamic energy that manifests in the way Koreans come together to cheer for the national football team.

And so Im went on to explore various subjects from Buddhist monks to street thugs. "The General's Son" action series went on to become one of the biggest '90s box office hits while "Seopyeonje" (1993), about pansori singers, became the first local offering to draw 1 million in admissions.

But Im had never expected these films to do well as he opted for unconventional endeavors. It would be more appropriate to call him a contemporary artist with a penchant for experimentation. He may have 101 films to his credit but as a self-professed "master of trial and error" he has no "know-how" when it comes to his craft.

"I don't think I have ever repeated what worked in the past. I'm never satisfied with my work. Usually filmmakers try to make as much use of scenes they shoot but editors are always shocked by how much I want to throw away. Even though I start out with thematic intentions I always end up throwing things away".

Some of the greatest artists recognize the virtue of letting go. Yet Im's editing frenzy seems to be more than about making bold artistic decisions.

Born in 1936, Im has witnessed all the political upheavals of modern Korean history, from the Japanese colonial period (1910-45) to the Korean War (1950-53) and military dictatorship. He had long been accustomed to strict censorship restrictions.

"When all these scenes get cut out, you become a censor guard yourself. You feel small and just try your best to work around the system", he said, recalling the Cold War era when he had to depict certain scenes in black-and-white because, for example, the North Korean soldier's communist uniform looked "too chic". Under the military regime, authorities asked him to change such metaphoric titles as "Wolf of Alaska" since the film in question did not actually depict the American animals.

"In the late 1970s I saw a Japanese movie script and was shocked by the freedom that was allowed in it. I made a few so-called 'controversial' films after that, but I wasn't trying to rebel against the authorities. I was simply making itsy bitsy baby steps to tell the stories I wanted to, thinking it was still within the safe lines".

In the 1980s he began receiving invitations to international film festivals but he was not free from politics overseas either.

"No one wanted to discuss my work for its artistic value", he sighed as he recalled the time. But today his films such as "Chukje" are among the few works that are shown in Pyongyang without being censored.

However, he still does not feel completely free from his own inhibitions. "After living under restrictions for so long and forcing yourself to limit your scope of imagination, I still don't feel confident that I broke away from my own sense of confinement".

But just as the inherent Korean spirit of "heung" has persevered, the same can dare be said about his artistic intentions. Implosive energy pervades even his slowest, most meditative films.

"My films are not easy to read into. But someone has to do it, no? From a producer's point of view I am a pain in the neck to work with. It's selfish but there are subjects that a director must interpret onscreen", he said.

"A lawyer who played a supporting role in 'Chukje' contacted me recently, telling me how he re-watched the film and realized the full meaning of it 20 years down the road. It's rewarding to know that they endure even if they are initially ignored", he said during the 16th Busan Film Festival earlier this month.

This subsequent interview took place at another dabang. He enjoyed a cup of morning coffee after taking a stroll by the beach with his wife, retired actress Chae Ryeong who recently played a cameo in "Hanji".

"It's amazing to see how Korean cinema has become so renowned in the international film scene and how large Busan has grown as a festival. It's truly quite moving, especially since people didn't even know where Korea was when I went to overseas film festivals in the 1980s".

He considers Busan his hometown not only because of Korea's largest film festival, of which he's never missed an edition since its inception in 1996, but because the southern port city is where he settled down after running away from home as a teenager. What began as a part-time job assisting with props on the set became a lifetime pursuit.

Looking back to his youth he said he wouldn't want to go back, especially the times when he made the Hollywood wannabes.

"But it was an invaluable experience that really makes me who I am now. I love being my age now. You become physically weaker, yes, but there are life lessons that you learn only with age - and you can make movies with no more wisdom than what you already know".

Asked if he has any advice for young filmmakers, he shook his head. "The future of cinema is for and of youths. Younger filmmakers have no restrictions when it comes to making movies. I believe in their talent".

As for his own future plans, Im shrugged. "If you could lead a life being crazy about movies, then that's all there is to it", he said. Having just made his first digital film he will most likely continue with the medium. But for now, he feels proud having married off his elder son. "I wasn't sure if I'd live long enough to see my boy go to college".

His fine wrinkles seemed to reflect the layered depth of his films, while the intense clarity of his hazel eyes expressed the fortitude with which he tells stories that he believes in. He chuckled like a little boy to hear the comment about his eyes, saying, "It's because I'm immature".

"[Portrait] Filmmaker Im Kwon-taek: master of mirrors"
by HanCinema is licensed under a Creative Commons Attribution-Share Alike 3.0 Unported License.
Based on a work from this source