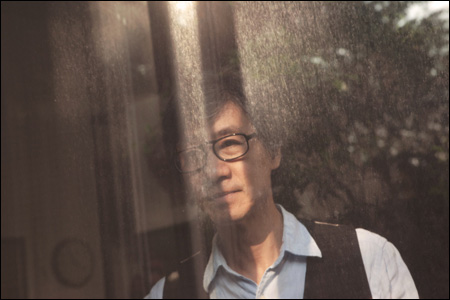 Fine art photographer Koo Bohnchang looks out the window of his studio, which doubles as his home, in Bundang, Gyeonggi Province, on Oct. 1. / Photography by Jesse Chun for The Korea Times

BUNDANG, Gyeonggi Province - A single phone call can sometimes make all the difference.

Koo Bohnchang, much too humble about his credentials, had initially refused to be included in this series via email, but gave in after some persuasion over the phone - perhaps it was because the 56-year-old photographer never forgot what it is like to ring up a seasoned artist.

"One phone call altered my fate", Koo said, recounting his student days in Germany some 30 years ago when he decided to ask esteemed photographer Andre Gelpke to critique his work.

"I am very shy but I can be quite bold when it comes to photography", he continued, chuckling softly. "I wanted to know where I stood as an artist and worked up the nerve to call Gelpke. The next thing I knew I was on a train to Dusseldorf".

Gelpke instilled him with confidence and emphasized the importance of crafting one's own identity rather than mimicking European greats. The encounter also helped launch an international career, to be recognized as a unique artist. His wide-ranging oeuvre includes "still life paintings" of local folk masks and pottery that harness his roots to more universal, artistic ends, as well as less culture-specific, abstract expressions.

Some of these works hung around his studio-home, a chic modern abode accented with Korean antiques. He allowed this reporter to freely explore the space and smiled every now and then, apparently recognizing the excitement he, too, had felt visiting an elder artist's "habitat".

The soft-spoken Koo's gentle demeanor was almost misleading though, considering how he had a knack for making bold decisions.

The Seoul native was a "quiet, ordinary guy" working for a major corporation after majoring in business administration. But when a friend, the renowned filmmaker Bae Chang-ho, left a promising corporate job to pursue his dreams in cinema, Koo, too, felt compelled to follow his creative impulses.

"We don't live forever and I felt determined to break away from the norm. I didn't want to live the life everyone expected me to". His family opposed the idea, treating it as a sort of "belated teenage rebellion" - even the 26-year-old Koo didn't know that his deviation would pave a new path for fine arts photography in Korea.

He ended up studying the genre along with design in Hamburg, and learned the art of observation from a painting professor. "I was able to purge myself of prejudices, to see how photography allows you to observe something and make that moment your own". Throughout the session with The Korea Times, he seemed to allow himself to be a subject of examination - being open to questions and photo shoot ideas, and taking initiative only to serve wine or to ask suggestions about his attire (he had prepared several outfits for the shoot).

As a little boy he had loved "conversing with objects", like rounded pieces of glass buried in the soil that revealed themselves during rain showers. This also reflects in his work today - how he uncovers beauty in overseen, mundane objects like dried up pieces of used soap ("Soap" series, 2007), or paints the passage of time through a dirty wall ("Portraits of Time", 1998-2001).

Though he can't pinpoint when, there came a moment when "the camera shadowed what I saw, when it became my own eyes and heart".

Yet as an aspiring artist in the 1980s, when photography as a fine art genre was still an alien concept in Korea, he did not know how to become a professional photographer. He thus designed his own path; he submitted works to a Korean photography contest all the way from Hamburg. Though he ended up taking part in it as a German interpreter for a guest judge, networking led to his first solo show in Seoul in 1983. Likewise, calling Gelpke resulted in meeting a Japanese agency.

A pivotal opportunity came in 1985. He was invited to partake in an international project in Tokyo, alongside some of the world's most renowned photographers including Steve McCurry (famous for works such as the National Geographic's "Afghan Girl"). Ironically, Koo became better known abroad before finding a niche back home.

When he returned to Korea in the mid-'80s, his abstract close-ups and strong surreal images had no place to stand among the local journalistic pieces or landscapes. The artist thus made a living by teaching and taking portraits for a dance company. He used a basketball court as a studio.

But he still sought a way to change currents in the local art scene. While designing postcards for the 1988 Seoul Olympics, he managed to persuade the Sheraton Grande Walkerhill Hotel gallery, one of the most prestigious art spaces in the country then, to host a group show. It was the first time the venue had ever held photography exhibition but it ended up drawing the largest crowd of visitors in its history.

"It's difficult to believe, but Korean fine art photography spans only 20 years", he said.

He nevertheless continued to achieve more firsts, such as organizing unprecedented shows juxtaposing photos with paintings. In 1998, Koo's ties to Japan led him to introduce local photographers' works to museum directors from around the world. Two years later an exhibition opened in Houston, Texas, titled "Contemporary Korean Photographers" for works by Koo, Atta Kim and Bae Bien-u, among others.

In 2008 Koo turned another page in the local arts world by directing the Daegu Photo Biennale. He had finally brought the world photography scene to Korea - 20 years since introducing fine art photography here and 10 years after taking Korean photographers to a global audience.

"It's funny, I never realized it before, how those three turning points in my life took place in 10-year intervals", he said.
Though the artist never seems to lose sight of the past, he keeps his gaze forward.

"You need to believe in your talent", he said when asked about advising aspiring photographers. "It's going to be tough but you have to persevere and proactively pursue your vision". Koo has taught at schools in Korea, the United Kingdom and Germany, and says he enjoys giving students the feedback he was not afforded in his youth.

"Fine art photography is disparate from the images that flood our lives in this digital age", he said. "It's not about capturing something by chance or creating for entertainment or commercial purposes, to catch the viewer's attention with something flashy or ostentatious".

Koo wrapped up Thursday, in Seoul, an exhibition of snow-capped landscapes of Jeju Island. "Photography is more than just depicting the beauty of a scenic view. It requires time and effort to deliver messages and to portray life - to move the heart".

The photographer thus continues his endeavor to tell life stories - camera in hand, to find beauty in unlikely places, to seize more moments. 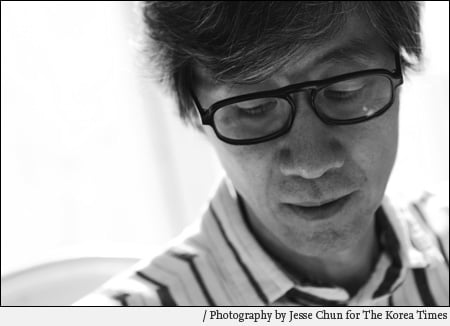 "[Portrait] Koo Bohnchang: seizing the moment "
by HanCinema is licensed under a Creative Commons Attribution-Share Alike 3.0 Unported License.
Based on a work from this source