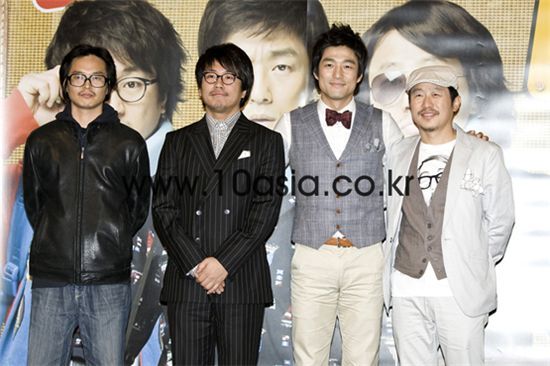 Three men have come together to find the wife who left home. The three men consisting of Sung-hee (played by Ji Jin-hee) who on the outside looks fine but is actually immature, Dong-min (played by Yang Ik-joon) who has been preparing to be a director for ten years and Yoo-kwak (played by Lee Moon-shik) a short homme fatale. During a live broadcast Sung-hee announced he wanted a divorce but his wife Young-shim (played by Kim Gyu-ri) filed for divorce before him, so the mortified Sung-hee brings Dong-min to search for his wife. The men begin to follow the traces left by Young-shim but as they continue she becomes shadier. They find out that Young-shim tried to commit suicide, a pyramid seller and on top of all that her older brother Yoo-Kwak, who Sung-hee's never heard for the past three years, appear. Yoo-Kwak who is also a four time offender in fraud has joined the group however, will they be able to find Sung-hee's wife? The movie follows the journey of these three immature men and from start to finish it is filled with laughter and armed with subtle pleasures but the last half of the film deals with some heavy themes. The film "Runaway from Home" is set for release on April 8. 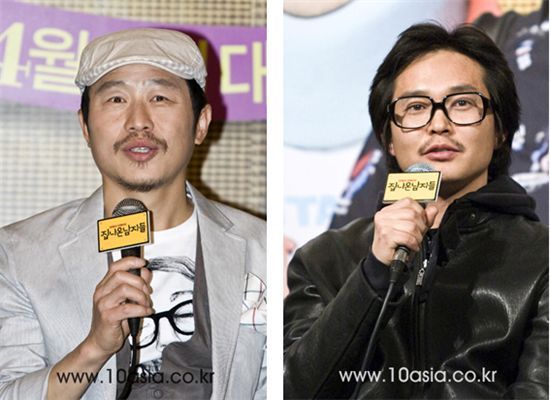 10: Ji Jin-hee's name is similar to the main character Ji Sung-hee who goes looking for his wife. This marks the second time that director Lee Ha and Ji Jin-hee are working together after "Bewitching Attraction". Is there any particular reason for this?
Lee Ha (Lee): I have a lot of interest in Ji Jin-hee. I like him as an actor but also on a personal level and I am very curious about him. I think I learned a lot about Ji while working on this film with him and hope to maintain this relationship. (laugh)
Ji Jin-hee (Ji): I will only meet with you if this film is a success...(laugh) First of all, I am a fan of director Lee. I became his fan when I received the scenario for "Bewitching Attraction". I think he has an understanding that is different from others who usually only utilize the general image they have of me. That is why I felt comfortable playing the role of Sung-hee in this movie and he is actually is similar to who I am in many ways.

10: How does it feel to be the main character of a feature film where you aren't the director? It seems that you had quite a number of skin-baring scenes too. (laugh)
Yang Ik-joon (Yang): They made the atmosphere on set comfortable so I did my best. And I just like showing some skin. (laugh) My belly keeps growing bigger so I end up showing it when I'm drinking or at a restaurant. It's splendid to expose. Whether it be your psychologically or physically. What reason is there to avoid it? Don't we live our lives exposing ourselves to our significant others? (laugh) If you ask me to take my clothes off now I will do it.

10: In the end of the movie, the reason why Young-shim leaves home is revealed, but I doubt whether it was really that necessary for her to leave.
Lee: It's not that I didn't feel it was important, but it was a difficult issue. I felt that the wife leaving the house didn't connect with the storyline of the movie. I believed there was a more important story to tell so I didn't want to force it to make sense.

10: In the movie, Ji-sung goes on an angry search for his wife because she left him first despite him actually having announced he would divorce her first. How did you interpret this being a married man yourself?
Ji: Maybe it had something to do with the sense of betrayal he gets from his wife for leaving but I think there also may be some underlying incident which occured during the three years they've been married. It may be something between just the two of them, whether it be related to their pride or their problems have been piling one after another. It would have been nice to have shown everything in the film but there were more important things to show so I think that's why it may come off like that. Even when it comes to your own next door neighbor, you may think you know everything but you don't really. In Sung-hee and Young-shim's relationship, Sung-hee goes looking for Young-shim and there may be some other reason that we don't know, to why she left.

10: All three of the characters are all huge losers and immature. Who do you think is the biggest loser amongst the three?
Lee Moon-shik (Lee M): Just look at the way we are sitting now (from right: Ji Jin-hee, Yang Ik-june, Lee Moon-shik) -- it shows you the evolution of mankind. I'm the caveman, next is Yang and the current human is Ji. By just comparing our looks, I think I'm the biggest loser. I think I'm one of those people who, no matter how hard I try hard to portray a casanova-like character, it'll be impossible. (laugh)
Yang: I don't think we are losers. We're all just human who want to live and love. Do you think there are any losers in this world? A movie has a beginning and an ending but there are things that are not shown i it, such as the past and how they live after the movie ends. It's great just watching how people live. We aren't losers and everyone else isn't a loser either. (laugh)
Ji: From Sung-hee's point of view, I think he could have felt that Dong-min and Yoo-kwak were losers when they first met. But when they go on the trip together, they learn many things about each other and about himself as well which makes his previous thoughts disappear.

10: Was there a point in your life where you thought you were a loser?
Lee M: I think I was a loser throughout the whole course of my life. (laugh) That is why it's hard to point out one time period. I think it'll be easier to figuring out the moment of my life that I wasn't a loser. No matter how hard I try, I am still a loser.
Yang: I thought of something when you asked the question. I was once in the bathroom taking care of some 'big business' when I realized there was no toilet paper. But I noticed there was a roll of toilet paper on the dining room table two meters away. (laugh) You probably know what happened next...
Ji: So what happened next?
Yang: I walked like a crab to grab the toilet paper...Don't other people have that experience as well? (laugh)
Ji: Don't force it upon others. (laugh) I also had the same experience and there are other ways to go about it. I think it differs with age and depending on the situation, whether you're wearing socks or not and depending on if you're wearing underwear as well. However, never in my life did I think I was a loser. Never. (laugh)

10: When we think about Ji Jin-hee, we think of a serious man. Where do you think your strength lies in particular when it comes to doing comedy?
Ji: I have always liked comedies. It's cool to be serious but I hope the audience likes this comedy. (laugh) I am also currently in MBC Monday and Tuesday historical drama "Dong Yi - Jewel in the Crown". It is helmed by director Lee Byung-hoon who is well known for "Jewel in the Palace". I'm the only actor who has ever played the leading male role for his dramas. (laugh) I am serious in that show so have fun watching it [the movie]. I think the audience will enjoy seeing my comical role after seeing my serious character and it will be fun at the same time. I think that maybe it'll help maximize my image.

10: In the movie, Sung-hee is considered a horrible person because he will say that he has never seen his wife's wrists before. Did you act differently towards your wife after filming "Runaway from Home?"
Ji: It made me want to treat her better and to get to know her more. I'm a bit embarrassed but I changed my wife's name into three hearts in my mobile phone. I asked myself if I have to do this but after filming this movie, that is how I felt. Do I really know everything about my wife? We didn't get married to get to know each other but had I not neglected her by any chance just because I'm busy? So I decided to put in a concious effort to give my wife my much more attention. 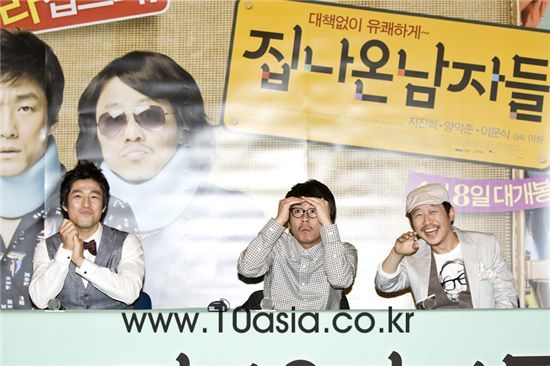 From left, film "Runaway from Home" cast Ji Jin-hee, Yang Ik-june and Lee Moon-shik goof off during a press conference held at a CJ CGV theater in Seoul, South Korea on March 31, 2010. 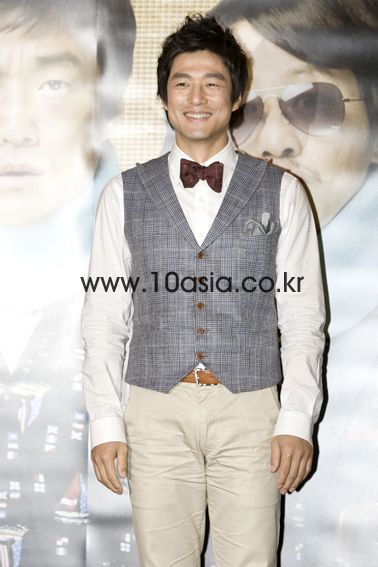 Actor Ji Jin-hee poses during a photo session for the press conference of film "Runaway from Home" held at a CJ CGV theater in Seoul, South Korea on March 31, 2010. 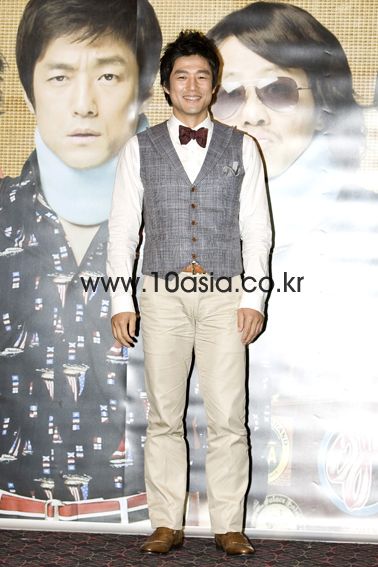