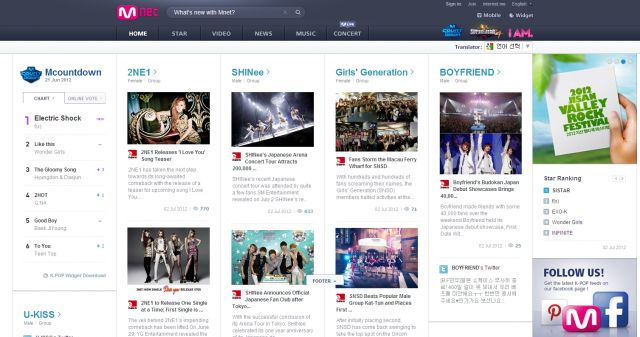 The new site aims to provide galleries of information grouped by individual artist and also strengthen communication among the site's users. CJ E&M found that global K-Pop fans usually view content based on his/her preferred artist, and rebuilt the main page of Global Mnet.com to reflect this trend. Users will not only be able to view news, photos and videos on the individual artists, but also see the celebrity's tweets in their separate sections.

The 'Star Tracking' function will make it possible to track, or follow, stars and view their information on personalized 'My Pages'. Artists will then be ranked by number of trackers in a 'Star Rank'.

The site will be more artist-oriented on the mobile site as well.

CJ E&M released the 'KPOP Stars' Android application to let 120,000 K-Pop fans browse content based on artist as possible on their phones. The app is available in English, Japanese, Chinese (Simplified/Traditional) and Korean, and an iOS app is also in the works.

User communication is another big point for the new site. Global Mnet.com was basically serviced in English, but now, the site will support more languages including Japanese and Chinese so that K-Pop fans from all over the world can more easily access the site. Google translator will be added to the site so that users can tailor it in their own language, whether that is Greek, German, Arabian, Turkish or Vietnamese.

Global Mnet.com and Mnet.com (www.mnet.com) will be working more smoothly together so that global fan reactions can be seen on one page through comment synchronization. This feature is expected to make communication between global fans and Korean fans easier.

Jin Min Jung, head of the global projects group in the Smart Media Division, said, "We decided to restructure Global Mnet.com to strengthen communication among global users and also allow them to navigate the site with more ease. There is a second and third wave of change coming to the site, so please look forward to seeing Global Mnet.com lead K-Pop culture and continue to grow".

To celebrate its new look, Global Mnet.com will be holding a series of events (http://global.mnet.com/event/brand.m) until July 18. Ten people who log in and use the KPOP Stars mobile app will be given Super Junior concert books and their comeback CD. Twenty of those who leave congratulatory comments will be given Mnet's K-Pop merchandise-eco-bags, t-shirts and pens. Winners will be announced on July 24.

"[Press Release] CJ E&M to Rebuild Global Mnet.com"
by HanCinema is licensed under a Creative Commons Attribution-Share Alike 3.0 Unported License.
Based on a work from this source