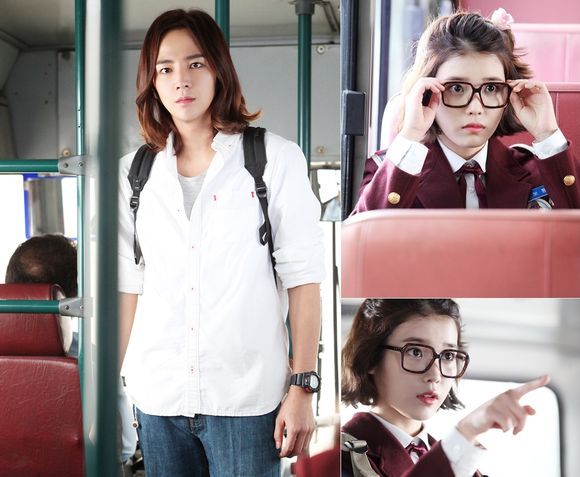 IU and Jang Keun-suk who look like characters from a cartoon, met for the first time.

Kim Bo-tong won't be able to forget her first encounter with Dokgo Mate. Her puberty was special as she met him when she was in middle school, while she was always shy. Her crush on him has continued for 10 years.

Jang Keun-suk and IU have completely transformed into teenagers, making it hard to tell their real age. Jang Keun-suk showed off his good looks in a white shirt and jeans.

IU became a student in uniform and big rimmed glasses. Her eyes turn into hearts at the sight of him and her ET-like finger points at the evidence that she's fallen head over heels for him.

However, Dokgo Mate doesn't even know she exists even though she doesn't stop expressing her love for him. Maybe she'll poke him a thousand times to get his attention. Expectations for the two lie here.

Meanwhile, "Pretty Boy" is an original by the genius cartoonist Cheon Gye-yeong and written by Yoo Yeong-ah who dramatized the movie, "Miracle in Cell No.7". Director Jeong Jeong-hwa adds his visual touches to the images and released this drama on the 20th of November.

""Pretty Boy" IU's first meeting with Jang Keun-suk"
by HanCinema is licensed under a Creative Commons Attribution-Share Alike 3.0 Unported License.
Based on a work from this source