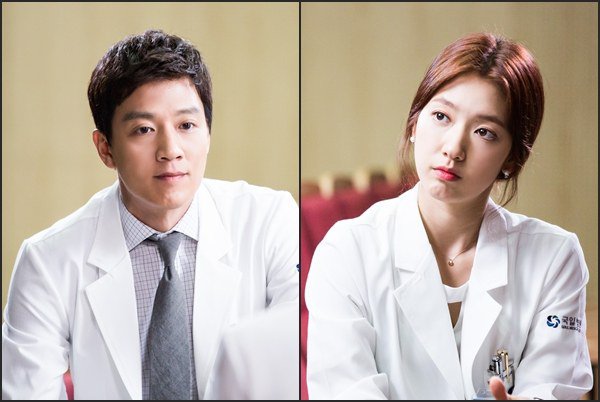 On the seventeenth episode of the SBS drama "Doctors", Ji-hong (Kim Rae-won) was spotted advising Hye-jeong (Park Shin-hye) calmly and logically like the teacher that he was before.

Ji-hong's face looks serious and so does Hye-jeong. They aren't smiling at all and they look like a couple but they also look like a teacher and student at the same time.

Ji-hong is is going to tell Hye-jeong a good news and a bad news and ask her for her objective point of view on the bad news. However, no one can be objective when it comes to their business. When Hye-jeong is full of anger, Ji-hong says, "I'll take revenge for you" but Hye-jeong says, "You're smart but do you really think I'll give up like that?"

In the end, Ji-hong tells her, "I don't care about revenge, destruction or punishment. Time's too precious to think about what I love today. There's no tomorrow". He tells her the story of his life and the things he experiences after his parents pass away. However, Hye-jeong doesn't seem obedient towards him.

Hye-jeong digs for the truth in her grandmother's death and Ji-hong is worried that she might get hurt. The episode can be seen on August 15th at 10PM.

"[Preview] "Doctors" Kim Rae-won and Park Shin-hye sitting down with serious faces "
by HanCinema is licensed under a Creative Commons Attribution-Share Alike 3.0 Unported License.
Based on a work from this source