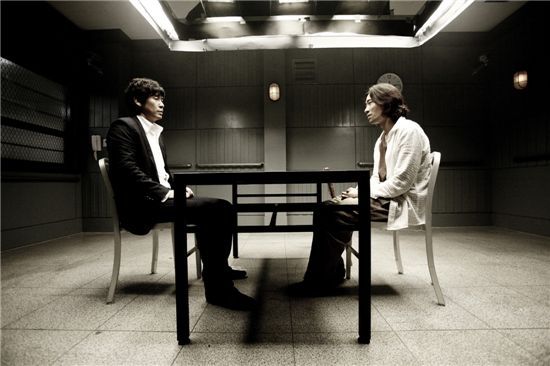 "No Mercy" - Can you have mercy on the film's ending?

A chopped-up body of a young woman is found at the mouth of the Keum River. Korea's top forensic investigator Kang Min-ho (played by Sol Kyung-gu) is brought in to look into the cruel, horrendous crime method. His medical advice and detective Min Seo-young's (played by Han Hye-jin) deduction lead to the arrest of a prime suspect -- an environmental activist named Lee Seong-ho (played by Ryoo Seung-bum). Lee's confession wraps up the first part of the movie but this is where the real story of film "No Mercy" begins. Lee Seong-ho, who has kidnapped Kang Min-ho's daughter, demands that Kang prove his innocence. During the process of carrying out Lee's orders, Kang finds the connection between Lee and a criminal case for which he was a witness years ago. As the old, unfortunate link between the two men unfolds and by the time Kang realizes that Lee's murder and threat were all planned as part of his revenge, the audience is left with just one question: what is the ending that Lee Seong-ho wants from all that has happened? That is also the ending to the movie. Whether or not "No Mercy", the first Korean film to open in 2010, will be remembered as a well-made thriller film will depend on the viewers' response to the ending.

Scenes from the film "No Mercy" [Cinema Service]

Korea's top actors Sol Kyung-gu and Ryoo Seung-bum play hostile enemies in the film, but the two rarely create much intensity in the actual film. Not to say that their acting is below par. It is just that since Lee Seong-ho is in possession of all the rules of the game, Kang can only run around within the boundaries set by Lee. That is why "No Mercy" has a closer resemblance to "Seven Days" and "Old Boy" rather than "The Chaser". All the more so since the film has a very shocking ending in store for its viewers.

If "No Mercy" leaves a strong impression on you after you watch the film, it is most likely because of the last couple of minutes of the movie. This statement means two things. First, that the ending is as shocking and original as it was in "Oldboy". And second, that the movie has little else going for it. One can predict quite early into the movie that Lee Seong-ho's confession was a trap to bring in Kang Min-ho and that the two have bad history with each other. The details about their relationship gets revealed halfway into the film. And from that moment on, what maintains the intensity of the storyline is not the showdown between Kang Min-ho and Lee Seong-ho nor Kang's struggle to save his daughter's life. It is only the wait -- the waiting for the evident reversal of an ending, whatever it may be -- that makes viewers endure the remaining running time. Whether or not the film's ending will be worth the wait will be confirmed when the film opens in theaters on January 7.

"[PREVIEW] Film "No Mercy""
by HanCinema is licensed under a Creative Commons Attribution-Share Alike 3.0 Unported License.
Based on a work from this source