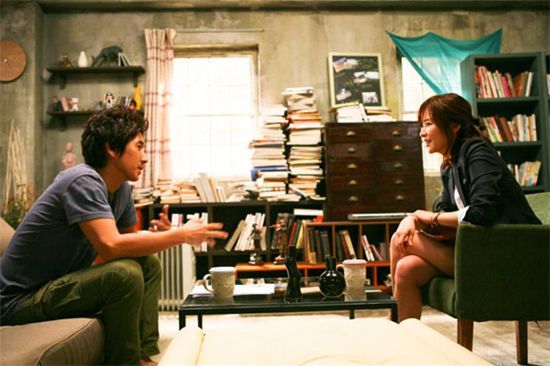 Cartoonist Jeong-bae (Lee Sun-kyun) whose work constantly gets turned down because of their lousy storylines is desperately in need of 50 million won to protect a portrait which he treasures as his own mother. Da-rim (Choi Kang-hee) who writes sex columns by summarizing contents from theses and surveys gets fired after insisting she wants to try her hand at writing a sex column of her own when she has no experience when it comes to men. The guy needs a story writer and the girl wants to write something that is her own. Plus, they both need money. That is why a competition for adult comics that offers a prize money of 100 million won may seem like the perfect opportunity to bring out the best teamwork from the two yet their collaboration takes off to a rocky start from the very beginning with the guy insisting on incorporating philosophical themes into adult content and the girl believing that comics are all about being fun.

Anticipation Quotient: 10
Thanks for not trying to pretend to be "cool"

Simply put, film "Petty Romance" is a true romantic comedy. Although there is nothing new in that two people fall in love with each after much bickering, the charm of this movie lies beyond that. The two characters do not display an ounce of manners, coyness or consideration in trying to impress the other person. But if you think the couple still looks loveable and cute, the credit should go to actors Lee Sun-kyun and Choi Kang-hee who make every moment and slightest sentiment real. Da-rim, who can make Jeong-bae gaze at her with adoration may he have been mad a second ago, is truly an adorable character, even from a female's point of view.

And while Jeong-bae and Da-rim's romance may be realistic, the comic story "Killer Instinct" that they work on is the complete opposite -- utterly unrealistic and risky. It was an appropriate choice, therefore, to show the hard-core bed scenes and acts of violence in comic format. "Petty Romance" may contain imagination but is quite frank in showing real romance, in the end making it fun and easy to relate to. Above all, do not miss the scene where Da-rim, a girl who learned about sex through text, has actual sexual intercourse for the first time -- it will be worth being nominated the most hilarious scene of the year. The film opens in theaters on December 2.

"[PREVIEW] Film "Petty Romance""
by HanCinema is licensed under a Creative Commons Attribution-Share Alike 3.0 Unported License.
Based on a work from this source