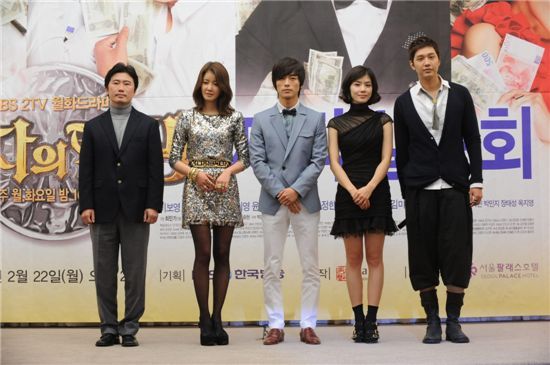 - Written by Choi Min-gi
- Directed by Lee Jin-seo
- Starring: Ji Hyun-woo (as Choi Seok-bong), Lee Bo-young (as Lee Shin-mi), Lee Si-young (as Bu Tae-hee), Namgoong Min (as Chu Woon-seok) etc.
- In one sentence: A story about the main character achieving success on his own after trying to meet his biological father, a conglomerate who had a one-night stand with his mother
- Premiere date: March 1, 2010, 9:55 PM

TV series "Master of Study" said that anyone can get into Cheonha University if he knows how to study. And the following drama "Birth of a Rich Man" says that anyone can become rich if he knows how to make money. "Birth of a Rich Man", which held a press conference at Seoul's Palace Hotel on February 22, is literally a story which shows the process of how one becomes rich rather than having been born rich. But the main character is a blue-blooded offspring of a business conglomerate, not a random guy who wants to be a rich man. Perhaps such strange off-beat element is what makes this drama interesting.

Main character Seok-ho (played by Ji Hyun-woo) is like Korea's historical royal prince who was fathered by a king, raised by his mother and later becomes a king himself. Seok-ho's father, who is one of the richest conglomerates in the country, brought him into the world by having a one-night stand with his mother but left no name, contact information or money. Since his only evidence of his connection with him is a pendant his mother gave him, he works as an employee at a top-rated hotel where Korea's richest conglomerates stay, hoping for a miraculous reunion with his father. But instead of going the conventional route by having the character search for his biological father, the drama takes a turn here -- it shows Seok-ho meeting the frugal conglomerate daughter Shin-mi (played by Lee Bo-young) rather than his father and creating his own destiny by jumping into the world of the rich. In other words, "Birth of a Rich Man" is a drama which stands in between two motifs -- blood relationships and self-achieved success. Can the drama be able to show its unique and distinct colors when it deals with the obvious rich-boy story and the predictable success story?

Scenes from TV series "Birth of the Rich" [KBS2]

Director Lee Jin-seo has stated that he "wants to depict a rich man who would be good for the society" and show that "what makes one rich is not his bloodline but his efforts" through the success story of Seok-ho. It is fine to gain wealth through fair and square efforts and to spend that wealth for the good of the world. But with such positive message, one cannot help but ask the uncomfortable question -- then did people who are not rich fail because they did not work hard enough? The same question was raised by previous TV series "Master of Study" regarding the subject of academic success. Whether viewers like this drama or not seems to depend on how well and how convincingly the show has prepared its answer to the question.