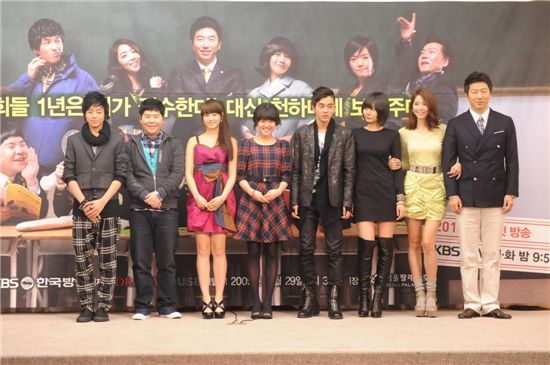 KBS2 TV - Monday/Tuesday evening drama "Master of Study"
Written by Yoon Kyeong-ah / Directed by Yoo Hyeon-gi
Cast : Kim Soo-ro (as Kang Suk-ho), Bae Doona (as Han Soo-jung), Song Yoon-ah (as Jang Ma-ri), Yoo Seung-ho (as Hwang Baek-hyun), Go Ah-sung (as Gil Pul-ip), Lee Hyun-woo (as Hong Chan-doo), Jiyeon (as Na Hyeon-jeong) and Lee Chan-ho (as Oh Bong-goo)
In brief : A biker-turned-lawyer whose life changed when he entered college attempts to teach a group of five rebellious students and help them get into the most prestigious college in Korea.
Premiere date : January 4, 2010 at 9:55 P.M.

How does one truly educate another person in this miserable world which only remembers who No. 1 is? By teaching them how not to become influenced by the dirtiness or how to win over the dirty rules? From what has been revealed at the press conference, held at Seoul Palace Hotel on December 29, "Master of Study" appears to be a drama that puts more weight on the latter method. When lawyer Kang Suk-ho (played by Kim Soo-ro) is put in charge of the liquidating Byung Moon High School, he sees his own troubled past in the problematic students who live their lives with no dreams. He then offers to teach them and proclaims that he will get five students accepted into Cheonha University, the most prestigious college in the country. Everyone -- including the teachers, students and the school's chairman of the board Jang Ma-ri (played by Oh Yoon-ah) -- calls him crazy and English teacher Han soo-jung, who believes that the purpose of education is not about getting into a good college, treats him as if he is shallow. But he establishes a special class for the five problematic students, including Hwang Baek-hyun (played by Yoo Seung-ho), to help them prepare for Cheonha University. It is hard to empathize with the plot -- which is about taking on the challenge of getting into the top school just to get back at the credential-obsessed society -- even if it was actually based on the Japanese comic "Dragon Sakura". But actor Kim Soo-ro, who played a humanistic teacher in the film "Our School E.T", and yet plays the completely opposite role of Kang Suk-ho in "Master of Study", says that "both methods are correct. Kang Suk-ho's method is appropriate for the children in the drama, who want to prove themselves by getting into a good school". He expressed that the show is not about the obvious cliche -- that high school seniors must study for college.

The footage revealed at the press conference was mostly edited to show how Kang Suk-ho came to take on the Special Class at Byung Moon High school. But the drama's biggest appeal is the glamorous traits of the Special Class students; the undeniably talented Yoo Seung-ho plays the rebel Hwang Baek-hyun; Lee Hyun-woo, who captured the hearts of older female viewers as Kim Yoo-shin in MBC's "Queen Seon-deok", plays the aspiring idol group singer Hong Chan-doo; and Go Ah-sung from the film "The Host" plays Gil Pul-ip, a determined girl who works hard for a better, brighter future. Like Kim Soo-ro said, "I befriended the kids first because they are so handsome and so pretty", this dream team of teenage actors have great looks and certified acting chops. And the fact that they appear in all sixteen episodes as youngsters is enough to stimulate the anticipating hearts of older female and male viewers.

"[PREVIEW] KBS TV series "God of Study""
by HanCinema is licensed under a Creative Commons Attribution-Share Alike 3.0 Unported License.
Based on a work from this source