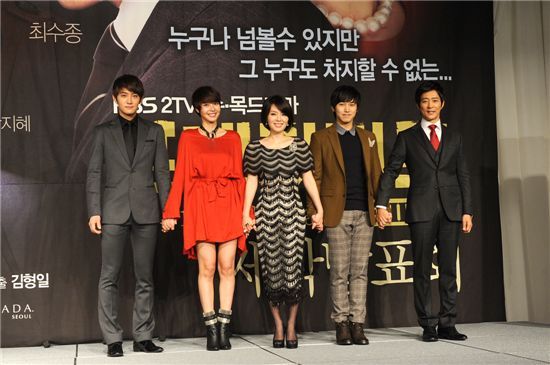 "SBS TV series 'Daemul - Big Thing' bothers you, right?" This was the first question the production team for KBS drama "President" received at a press conference held ahead of the drama's premiere on December 15. It was not that hard to guess that question would come up sooner or later. After all, both dramas are about politics with both main characters striving to become presidents and to top it off, they will air on same day and time slot. This practically stole attention to the fact that it will be the first time in 19 years that actor Choi Soo-jong and actress Ha Hee-ra, married in real life, have come together as couple in the upcoming show as well, as president and the first lady, to be more precise. But Choi, who will play the role of Jang Il-joon assures that the two dramas "are entirely different dramas". So how will the two differ? "Daemul - Big Thing" versus "President" and President Seo Hye-rim (Go Hyun-jung) versus President Jang Il-joon. Which candidate gets chosen will be up to the voters, no, the TV viewers.

1. "Daemul - Big Thing" vs. "President"
If "Daemul - Big Thing" is a political drama "President" is closer to a family drama in disguise of a political one. Although it was the unfair death of her husband that triggered Seo to enter the world of politics, since then her life has been influenced by her continued encounters with party leaders like Cho Bae-ho (Park Geun-hyung), Kang Tae-san (Cha In-pyo) or those linked with the political world such as prosecutor Ha Do-ya (kwon Sang-woo). In contrast, director Kim Hyeong-il of "President" explains the drama is "not a success story of one man becoming a president" but a family drama of a son coming to understand his father and a wife coming to understand her husband". Therefore those who decide to make Jang Il-joon (Choi) run for the presidency are not his party members but his family. His ambitious wife (Ha), willing to assist her husband as best as she can, his son Sung-min (Sungmin) who respects him but at the same time harbors hatred toward him, and his other son Min-gi (Jay), born between him and the woman he used to love before he got married, who suddenly shows up 30 years later, all add up to form a miniature political world of its own. How Jang manages to resolve his family's conflict amid his quest to realize his goal as a president will be what differentiates "President" with the ongoing "Daemul - Big Thing".

2. Seo Hye-rim vs. Jang Il-joon
"For Seo Hye-rim, everything's about realizing social justice but Jang Il-joon is someone who can be dirty, sometimes to the point of abandoning the whole concept of justice", said Choi. Although the two characters both share the same dream they are different in the way they achieve that goal. For Seo who lost her husband because of the government's pathetic diplomacy skills, her goal is to make a country that can effectively protect its citizens but to Jang who led a contradictory life where he becomes a democratic fighter-turned-conglomerate by marrying into a rich family, needs supporters he can trust. Therefore while Seo tries to realize justice through righteous, albeit, and unrealistic means, Jang is left to deal with walking across the line of good and evil to fulfill his ambitions. But as different as they seem in their means of reaching their goal, it is evident that both are heading for a path to becoming an idealistic leader which is hard to find in real life.