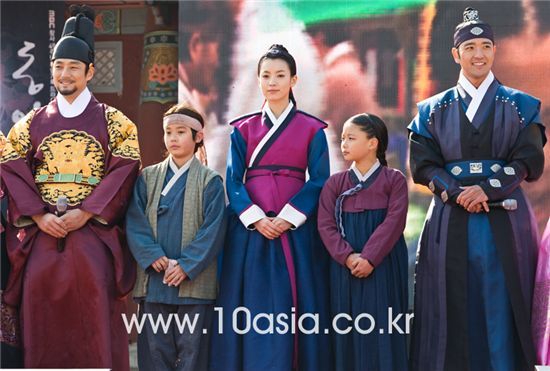 The cast of MBC TV series "Dong Yi" poses during a photo session of a press conference held at the broadcaster's outdoor set in the city of Yongin in Gyeonggi Province, South Korea on March 18, 2010. [Chae Ki-won/10Asia]

Major broadcaster MBC president Kim Jae-chul who in person attended the press conference for TV series "Dong Yi" held at the public network's outdoor set in Yongin city of Gyeonggi Province, said he would like to "hold a screening in Japan if Lee Byeong-hoon allows it". And remarks by actor Bae Soo-bin who "trusts in and goes with everything the producer wants because he sees everything from the big picture" and Choi Cheol-ho who feels he "could just try to blend in as well as possible than trying too hard since the cast is already so great" -- revealed how firmly the cast believes in the drama. And because of such high expectations, Lee Byeong-hoon probably feels "as burdened as Korean figure skater Kim Yuna may have felt ahead of competing in the Olympics", as actor Jung Jin-young said. That is just how much attention "Dong Yi" is receiving for being Lee's new drama on a grand scale involving up to 20 major characters.

That is why "Dong Yi" is about numerous desires. Within the drama, there are the desires various characters have including the dreams Dong Yi (played by Han Hyo-joo) has as the daughter of Choi Hyo-won (Chun Ho-jin) -- a person in the lowest class of society who is wrongly accused as a traitor -- until the day she becomes a queen. Externally, the show quite explicitly reveals its desire to post high viewership ratings as well as reignite the Hallyu, or the Korean wave. What should be fulfilled foremost and ultimately, however, are viewers' desire to watch an entertaining show. Lee Byeong-hoon will be able to meet up to expectations surrounding this most traditional and blockbuster-like drama if he can deliver an enjoyment which matches up to its physical setting.

Anticipation Quotient
Lee Byeong-hoon should change up his style since we now have historical dramas like "The Slave Hunters": 6
You're good if you can stay good at what you were originally were recognized for: 9

'The woman who achieves her highest dream from the lowest walk in life'. This statement written in the press release for "Dong Yi" clearly expressed what the drama itself will be about while explaining the motif that Lee is most well-known for in his historical dramas -- the story of one who overcomes his hardships and achieves a new goal in life. That is why as producer Lee himself admits, there are those who no longer believe in his style of drama where 'the main character goes through rough times yet later sees the problem resolved'. But as Hollywood scenarist Frank Daniel said, it is 'very difficult for someone trying so hard to make something happen to actually achieve something' as it is with trying to make viewers become immersed with a story. Both the motif to Lee Byeong-hoon's historical dramas and "Dong Yi" are good enough to meet up to this. It will be interesting to see where "Dong Yi" will position itself.

"[PREVIEW] MBC TV series "Dong Yi - Jewel in the Crown""
by HanCinema is licensed under a Creative Commons Attribution-Share Alike 3.0 Unported License.
Based on a work from this source